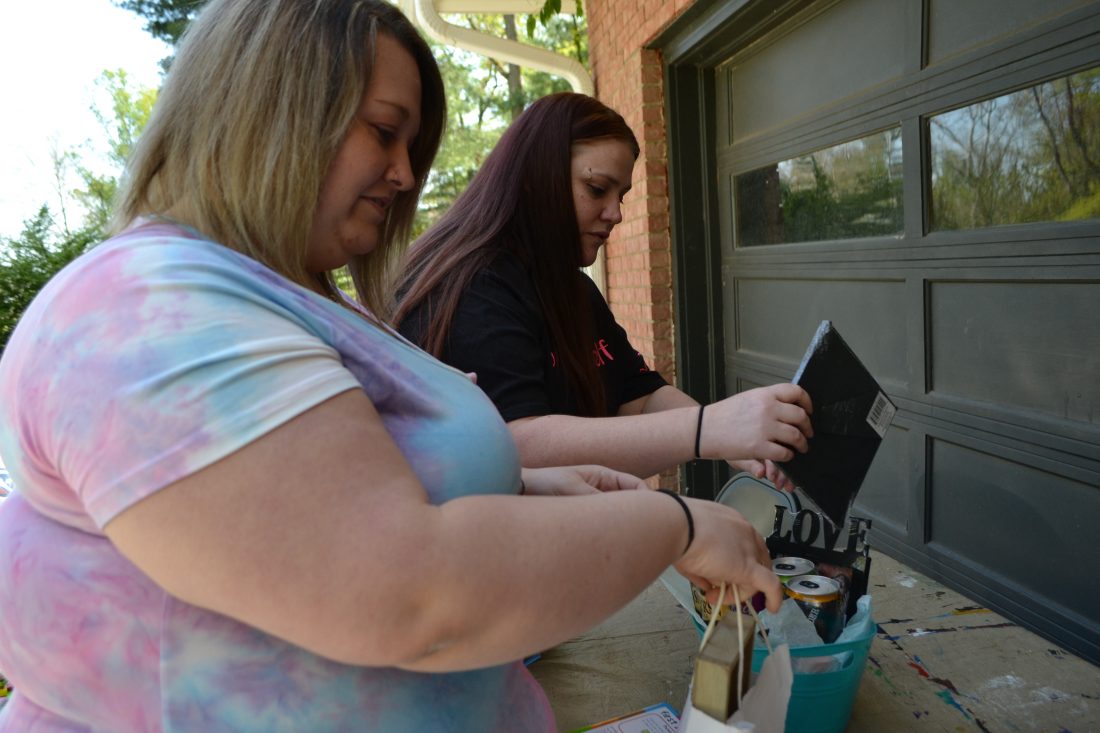 Photo by Michele Newbanks Shyla Prunty opens a wine bag she was recently gifted, while Nikki Nelson adds goodies to a basket that will be raffled off live on Facebook.

Groups of local residents are popping up all over Facebook who are looking to put a smile on someone’s face.

MOV Wine and Dash started May 6 and the private group is already up to 2,200 members.

People join the group and there are albums for each area, such as Belpre, Marietta, north Parkersburg or Devola.

People put their addresses in the album where they live and other members of the group can leave wine and snacks at their home.

Nikki Nelson, 35, of Devola, is one of the 12 administrators for the strictly-age-21-and-over group. She said people join because they just want to bless others, put a smile on their face or pay it forward.

“Some of the things given away aren’t cheap,” Nelson said. Gifts have included beauty products, snacks and sweets.

She said some only want to gift others, so they don’t post their own addresses.

There are 12 moderators and admins on the group to check for any minors who try to become members. So far, they have caught four minors who were immediately blocked.

“There are questions to answer. If they don’t answer them, they aren’t added,” said Rockport, W.Va., resident Shyla Prunty, who started the group with Nelson.

Before people are admitted to the group, an administrator goes through their profile to see if they show a birthdate to make sure they aren’t a minor. They also check who any mutual friends might be.

Prunty said there have only been a couple of issues with people stealing the wine bags, and the bags were stolen by neighbors living in the same apartment complex.

Nelson said only group members can see others’ addresses and if they don’t feel comfortable showing their address, they can either ask an admin to post it anonymously or they can ask members to private message them for an address.

Prunty said for those who aren’t wine drinkers, there are also craving dashes or snack dashes, such as those they’ve done for pregnant women. Some members also ask for beer instead of wine.

Washington County Sheriff Larry Mincks said he didn’t have any major safety concerns with the practice.

Participants don’t know who is in the group, but most people can be Googled and found online, he said.

“I don’t ever recommend giving out your personal information, but anyone with computer expertise can find it out,” he said.

• Facebook groups called Wine and Dash are popping up.

• People sign up and leave their address and people gift wine and snacks.

• Bags can include beauty products or sweets along with wine.

• Some request other alcohol, such as beer, instead of wine.