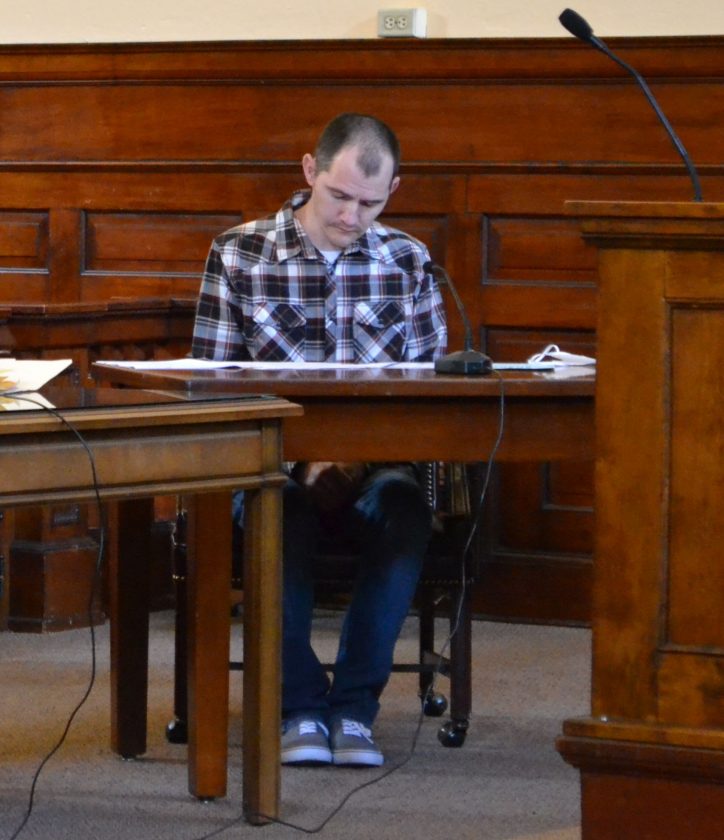 Almost two years after causing a collision that sent a Marietta woman to the hospital, Joshua Ross was sentenced Wednesday morning to 30 days in the Washington County Jail.

Ross, 39, of 1161 E. Whittier St., Columbus, was also given three years of community control and a five-year driver’s license suspension. He was booked and released Wednesday, with orders to return on Aug. 11.

On Feb. 10, he pleaded guilty to fourth-degree vehicular assault and first-degree misdemeanor driving under suspension.

“He has a terrible driving record,” said Washington County Assistant Prosecutor Jim Schneider, who noted he inherited the file from where it had been sitting on the desk of the former prosecutor for more than a year.

The sentencing memorandum filed March 3 by the Washington County Prosecutor’s office states the road conditions on Ohio 7 were dry with no adverse weather conditions present on the day of the accident. The victim, Joyce Ross, was over age 65 and suffered serious physical harm. She is not related to Joshua Ross.

Schneider said the victim was stopped by a flagger and was third in line, directly behind a tow truck. Ross reportedly said he hit his brakes, but his car slammed into the rear of the victim’s car, which went airborne before flipping and landing on its wheels on the other side of the road.

“It caused her to not be comfortable driving,” Schneider said, adding she is still suffering and being treated for severe whiplash.

Court records show Ross admitted to sending a message to his employer on his cell phone while driving. At the time, his driving privileges were suspended by court order. When troopers from the Ohio State Highway Patrol searched his car after the crash, they found a bottle of the narcotic pain relievers tramadol in the car.

The victim was in the hospital for five days, then spent the next week in rehab for her injuries. She was required to wear a body and head brace from her waist up for a month.

Schneider told the court it was a difficult case to prosecute as little investigative work was done by the prosecutor’s office or the highway patrol.

“No blood was drawn and no cell phone records were requested. It could have helped our case. It was a lack of effort with the highway patrol and the prosecutor’s office,” he said. “They never tried to establish the speed he was going. They didn’t ask whose tramadol pills were in the car, as it was registered to his mother and she said they weren’t hers.”

Washington County Prosecutor Nicole Coil said Wednesday that the result of the case is a product of the challenging circumstances in her office at the time the file was received.

“I have not reviewed this file, but I will say that I find the highway patrol to be diligent and responsive in regard to their cases,” she explained. “If handled by our office in a more timely manner, I believe that some deficiencies in the case could have been remedied. Unfortunately, we cannot change the past, but only do better going forward.”

Calls to the Marietta Post of the Ohio State Highway Patrol were not returned Wednesday.

Defense attorney Eric Fowler filed a sentencing memo on Wednesday that described how Ross has completed in-patient treatment at Ridgeview Behavioral Treatment in September 2018 and finished an intensive out-patient in October 2018. Since September 2018, Ross has been living at Fresh Start, a sober living center. At Fresh Start, he is required to attend at least three 12-step meetings per week and maintain sobriety.

“He’s a recovering success story,” Fowler said. “He has accomplished many of the things the victim asked for. He’s turned his life around.”

Along with the jail sentence and community control, Ross was fined $2,500. Washington County Common Pleas Judge Mark Kerenyi read a long list of traffic violations Ross has been charged with over the years.

“He’s an absolute terror on the road,” he said.

Ross told the court he had entered rehab a month before the accident, but after the death of his sister, he decided not to return to rehab. Calling the crash a “wake up call,” he chose to go back to rehab, with the goal of getting a job, as he was on disability for several years.

“The best thing I can do is move forward and help other addicts,” Ross said. “I don’t want to leave the sober house now. I don’t feel like I’m ready.”

Kerenyi said he was quite impressed with the work Ross has done to better himself.

•Joshua Ross, 39, of Columbus, was sentenced to 30 days in jail for vehicular assault and driving under suspension.

• He received three years of community control and a five-year suspension of his driver’s license.

• In August 2018, he did not stop in time to avoid a collision with another car in a construction zone on Ohio 7.

•The driver of the other vehicle, Joyce Ross, was hospitalized with severe whiplash.