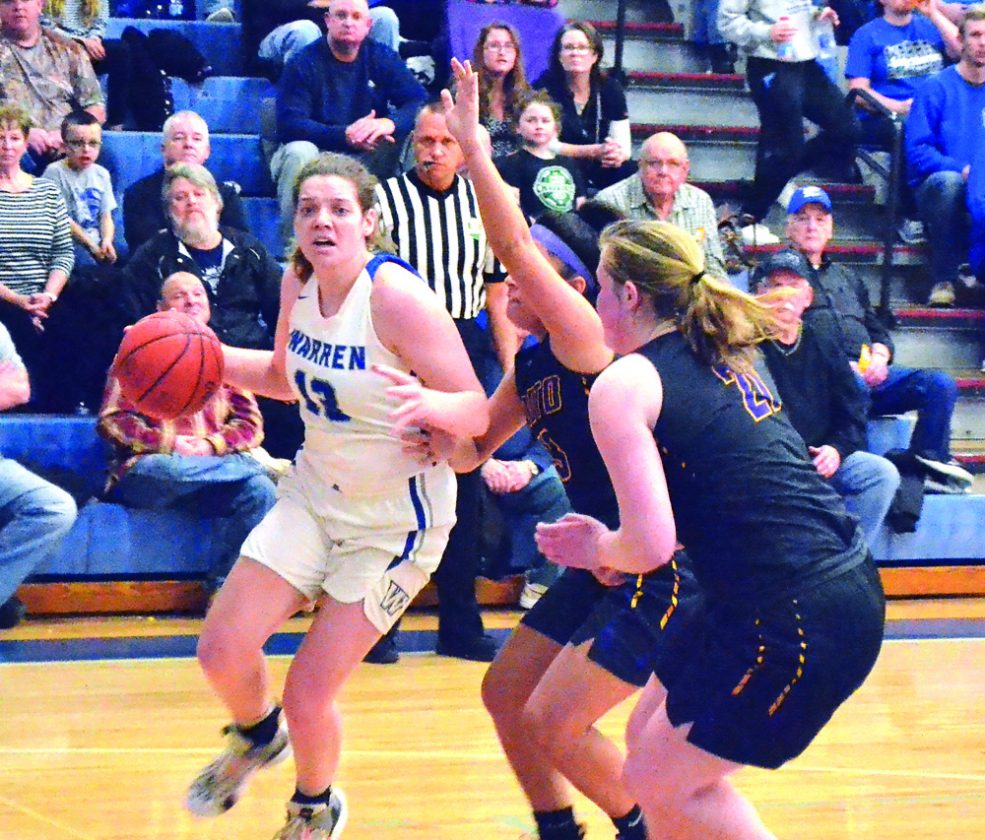 VINCENT — Quietly the Warren girls basketball team wrapped up a spectacular regular season Monday evening with a 17-point victory over a 17-win team in the Unioto Shermans.

The win was the 20th in a row for the Warriors and closed out their regular season with a phenomenal 21-1 record.

What makes the Warriors’ record even more impressive is the fact that they have played a very tough schedule including the final two games of the year against 15-plus win teams in Fairfield Union and Unioto, which Warren won by 18 and 17 points, respectively.

Warrior head coach Amy Colgrove knew that she had a talented team heading into the season but winning 21 times may have even exceeded her expectations.

“I knew in the summer that this team was going to be pretty special and each game has been kind of different and provided different challenges but they have really responded,” said Colgrove. “We are such a balanced group and we are fortunate to have so many different weapons. It’s just a solid group from top to bottom.”

The only blemish on the Warriors’ record was a 63-58 loss to Vinton County way back in the second game of the season.

The Warriors have earned their number four ranking in the latest Division II rankings with wins over 15-plus win teams including Marietta (twice), Fort Frye, Fairland, Nelsonville York, Fairfield Union and Unioto.

You won’t find a 20-point per game scorer on the Warren roster but you will find a team that gets contributions from any one of the girls on their roster on any given night.

Sophomore post player Abbie Smith, who leads the team in scoring, feels that the 21-win season is the culmination of an incredible amount of work put in by the entire Warrior team.

“It feels great to have this kind of a season and we have been working hard since the summer,” said Smith, who led the team with 17 points in the win over Unioto. “Our goal all along has been to get to state so we want to keep working to get there.”

Along with Smith, Colgrove usually starts seniors Sommer Saboley and Molly Grayson at guards with juniors Savannah Banks and Millie Ryan on the wings and goes to her bench early and often in an effort to keep the freshest legs on the court.

Senior defensive specialist Emme Bowe and junior Olivia Alloway are usually the first ones off of the bench along with senior sharp-shooter Caspen Ford and freshman Alexis Frazee, who has been out of late with an injured hand.

Like the rest of her teammates, Grayson is thrilled with the way the regular season has played out but realizes the team has work left to do to reach their ultimate goal.

“We’ve been really working hard for this for months and it’s really paying off,” said Grayson. “We have just got to keep working hard to keep this thing going.”

“To be 21-1 and to win 20 straight and be ranked fourth in the state, I don’t know if any Warren team has been able to do that before,” said Colgrove. “They show up to practice and work hard and it’s a fun group to coach.”

With the regular season out of the way the Warriors will now turn their focus to sectional tournament play.

“We’re excited for what’s coming up and we are just going to take it one game at a time and see what we can do,” said Colgrove.

Warren’s first test of the post season will come Saturday when they take on Hillsboro at 1:45 at Logan High School.

As the fourth-quarter clock wound down in Fort Frye’s 49-31 regional triumph over second-ranked Portsmouth Notre ...

Sheba was soft to the touch. With a distinguishing black left eye patch, she was beautiful, so very ...

After taking it on the chin at Mount Union last Wednesday, Marietta College regrouped Saturday and rallied in the ...