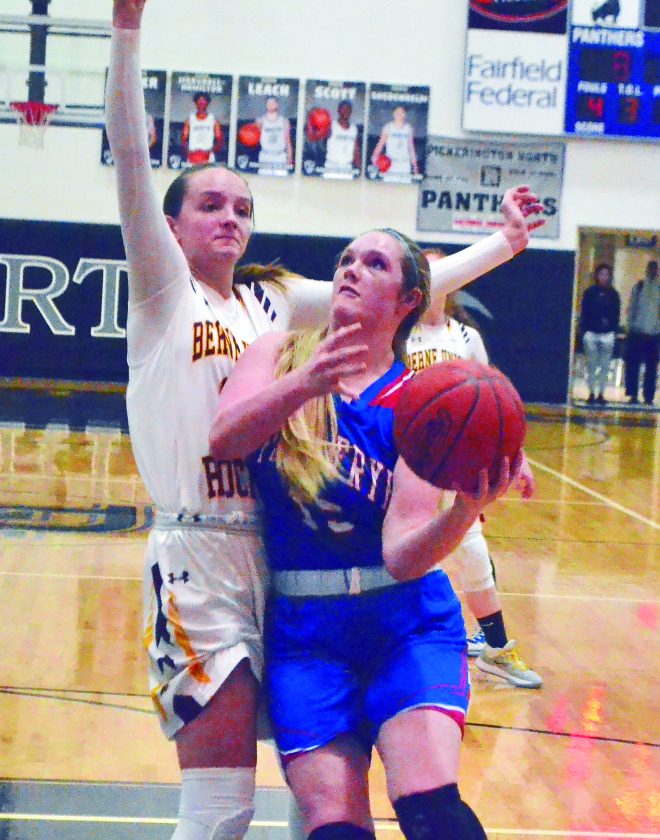 PICKERINGTON — Number-four ranked Berne Union was bound and determined that someone other than Fort Frye leading scorer Hannah Archer was going to have to beat them in Thursday evening’s Division IV Regional semifinal at Pickerington High School North.

The Rockets succeeded in being able to limit Archer, but they had no answer for Cadet senior Kiersten Kesselring, who tossed in a game-high 16 points to pace Fort Frye to a 37-28 win to advance to the Elite Eight in the state.

From the outset of the game Berne Union had 5-foot-10 freshman Baylee Migron cover Archer like a blanket, forcing Fort Frye to turn to some other players for offense and the likes of Kesselring, Olivia Schneider and Lexie Huck rose to the occasion in a big way.

“They focus on Hannah and look what happens. We have got other players that are going to step up,” said Fort Frye head coach Dan Liedtke, who is one win away from coaching in the Final Four for the second time as girls coach. “We knew they were going to do that and we had a good plan for it.”

The Rockets had quite an advantage length-wise over the Cadets as three of their starters were 5-10 or better but that wouldn’t stop the Cadets from dominating under the basket as they out-rebounded Berne Union by a healthy 32-20 margin paced by 10 from Kesselring and seven by Archer.

“I thought we did a great job of taking care of things in the paint,” said Liedtke. “We watched film and no matter what play they ran it was always going to go in the post so we wanted to stack things in there and be ready for any kind of a lob or drive and our girls did a nice job.”

The Cadets jumped out to a 9-1 lead early in the game thanks in part to triples by Huck and Schneider before the Falcons scored the final four points of the quarter including a buzzer-beater by junior Bella Kline.

Both teams went cold in the second quarter as they played to a 6-6 tie as the Cadets maintained their six-point lead at the intermission.

Kline scored five quick points early in the second half as Berne Union pulled to within a single point of the Fort with 3:24 to play in the third.

Neither team could buy a bucket as they traded several empty possessions before Huck canned a long 3-pointer from well behind the arc to give the Cadets a four-point lead.

Kesselring followed with a huge triple of her own to extend the lead to seven and give the Cadets a bit of breathing room.

“I kept saying to the coaches on the bench that Lexie wants the ball,” said Liedtke of Huck’s pivotal 3-pointer. “I could tell she wanted a shot and I knew when it left her hands it had a much better chance of going in than not.”

A 3-pointer by Berne Union freshman Abbi Evans early in the final quarter cut the lead back to three but despite a fourth quarter that saw them miss six straight free throws at one point, the Cadets made enough freebies to pull away to the nine-point win.

As has been the case in all five postseason games, the Cadet defense was the key to winning a game in which they shot just 25% from the floor (9-35).

“We knew playing good defense and not letting them score in the paint was going to be the key,” said Kesselring of a Cadet defense that has yet to allow an opponent to score 30 points in the tournament. “We just packed it in and played strong. We work on defense a lot in practice and it paid off tonight.”

Kesselring’s double-double couldn’t have come at a more opportune time than on a night when her team needed it the most as Archer was held to a single point.

“I think another key thing for us is that we are all scorers,” said Kesselring, who was supported by eight points apiece from Huck and Schneider. “We take pride in our defense but we can all score and we have been showing other teams that.”

The win advances the Cadets to Saturday night’s regional final against Portsmouth Notre Dame at 7:30 p.m. back at Pickerington with a berth to the state tournament in Columbus on the line.

“It was a battle and we knew it was going to be,” said Liedtke, whose team remains unranked despite improving to 25-2 with the win. “There is no patting on the back right now. We’ve just got to keep going.”

Berne Union, whose season comes to an end with an identical 25-2 record, was led by Kline with 15 points.