Williamstown’s Eli Inman both a golf and hoops standout 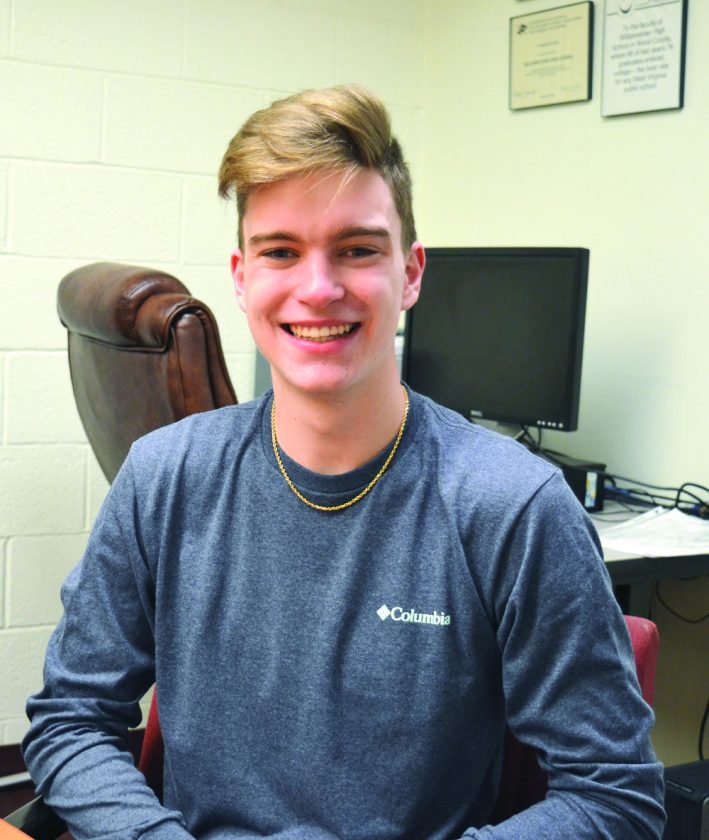 Photo by Ron Johnston Williamstown senior Eli Inman has been a key member of the Yellowjackets’ golf and boys basketball teams during his prep career.

Question: Is golf your favorite sport?

Answer: Oh, yeah. It’s really relaxing. At times, it can be stressful but I just like it a lot more. It’s more fun. It’s a different game every day. I really like it a lot.

Q: How long have you been golfing?

A: I just started when I was a sophomore. I played around with dad, like maybe a couple of times a year, but I really didn’t start playing competitively until my sophomore year. (Smiles) I watch the PGA Tour a lot. People think it’s boring, but I love watching it.

Q: What’s you best score as a golfer?

Q: Is Golf Club of West Virginia your favorite course in this area?

A: (Smiles) I live two minutes away from it, and the guys out there are really nice to me. They take care of me.

Q: How’d you do this past season?

A: I had a rough senior season. I started off the year not playing too well. Then, in a span of about three or four weeks, I was playing really well. But then near the end of the season when it really mattered, I started playing really bad again. But…the thing about golf, it’s hit or miss.

A: I have not. I came close actually a couple of weeks ago. I was on 18 at the Golf Club, and my ball was probably about six inches away. That’s probably the closest I’ve ever been.

Q: Greensboro? Why there?

A: Their coach (Jim Cantamessa), he started contacting me at the beginning of our golf season. He and his assistant coach (Joe Burns), they’re really nice guys. Coach Cantamessa actually played professional basketball overseas in Spain. He’s like 6-9.

It was just a real nice opportunity that Greensboro gave me. They’ve been a frontrunner for national championships at the Division III for the past three or four years.

A: Tony Finau. I have a picture with him from the Memorial Tournament at Muirfield up in Dublin (Ohio). He always seems to be place in the top 10. He’s been one of my favorite players, because he’s a really nice guy.

Q: I’ve got to believe that you’ve also been recruited to play basketball at the college level?

A: I really haven’t had that many contacts in basketball. I haven’t reached out to anyone for basketball. After my junior year, I focused on golf. That’s what I want to do.

Q: When did you start playing basketball?

A: I love basketball. And I started playing at Waverly Elementary School, because they used to let third-graders play.

I was at head coach Fred Sauro’s camp in Williamstown from the first grade up.

Q: Have you always been one of the taller players growing up?

A: Yeah, mainly. There’s only been one kid, Isaac Cutright, who’s beat me. He’s always had an inch or two on me ever since we were little.

Q: You can shoot the 3, and that’s something I’m sure you’ve practiced a lot on?

A: I have. It’s repetition in the gym on that.

Q: What’s been your single-game high in points as a varsity player?

A: I think it was 37 against Wood County Christian last year. It was on Senior Night.

Q: This season’s team has a lot of offensive weapons on it?

A: It’s been great, because we could have one guy be off, but then the other two or three guys who can score will be on. It can be any given night. It helps a lot.

Q: Williamstown’s had several nice additions to the team, like Sam Cremeans, Colten Luther, and Peyton Amrine. Right now, the Yellowjackets are top-ranked in Class A with a 21-1 record. Did you see this coming before the start of the season?

Q: OK, what happened at the Fort Frye game? (Williamstown’s only setback) You didn’t shoot enough.

A: (Laughs) I know. I get that all the time from everyone. But I just think we really hadn’t had many close games. But Fort Frye just played really well. That gym was packed that night. It was Senior Night, and the student section was loud.

Q: Fort Frye even gave you and the other Williamstown seniors a gift?

A: They gave us a little Hershey bar, gum, and a little Class of 2020 pin. It was cool and really nice of them.

A: I think it will be. We have a lot of confidence that it will be this year. Coach (Scott) Sauro and the coaches will get us prepared. We went to state last year and got beat bad in the first round. But this year, I think we’ll be able to make a good run to state.

Q: Do you have a favorite basketball team?

A: The Charlotte Hornets. (Laughs) They’re not doing too hot this year. My cousins live near Charlotte. At one of the games, we saw Michael Jordan sitting at the end of the Hornets bench. And that was pretty cool to see him there in person.

Q: What do you do off the playing fields? Any hobbies?

A: Mainly, now, it’s just been golf and studying. That’s about it.

Q: Who’s inspired you and had an impact on your development as a student/athlete?

A: Definitely my mom and dad. They’ve pushed me to be better. They’ve done anything and everything, out of their way, to help me succeed and to where I want to go.

Q: Do you have a nickname?

Q: Being a senior, is there anything you’d like to shout out, or any wordsJust of advice or wisdom for the underclassmen?

A: Just keep your head on your shoulders and stay focused.