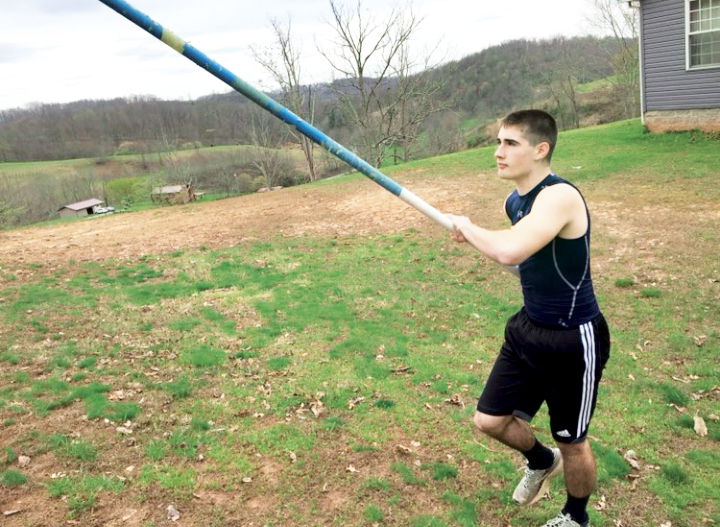 Photo provided Doddridge County’s Reese Burnside practices running with his pole on approach to the mat during a training session at the Burnside residence in West Union. Due to the COVID-19 pandemic, Burnside’s training regimen has become a creative smorgasbord of drills and exercises.

What is a two-time Class A pole vault state champion and two-time All-American in the junior Olympics to do for practice in these troubled times?

Of all the spring sports, Doddridge County’s Reese Burnside joins his track and field brethren in the high jump and long jump as those stuck between a rock and a hard place.

As hope remains high for the possibility of an abbreviated season, the ability to stay in as close to top shape as possible remains critical. This only gains in importance upon review of the West Virginia Secondary School Activities Commission’s rule on competition. The requirement stating all high school athletes must have 14 uninterrupted days of practice before participating in regular-season activities is huge.

It’s hard to imagine the WVSSAC waves this rule if things ever go back to a semblance of normality, too. It was inserted into the book for the protection and health of sports participants.

Given this decision likely would be the only restriction before the meets that count begin, every little advantage immensely helps all athletes upon their return to campuses around the state.

But, Burnside possesses just a third of the training equipment he needs on a daily basis. Building a pole vaulting pit and erecting the ideal setup in his backyard isn’t possible, either. Not enough flat ground existing around his residence nixed the construction of a runway.

Consider also all the factors crafting the perfect jump. Decent speed and strength in the legs and upper body provides a good foundation for a solid attempt. Excellent handling of the pole before and during the jump is obviously critical. Great control of the body and a tight core then at least guarantee a shot at clearing the bar.

When everything works perfectly, the complicated maneuvers form a beautiful picture of sports art. To put himself in position to paint his beauties, the need for precision has led the Bulldog to creative training in the past weeks.

“We’ve just been practicing what we can,” Reese said.

He’s done so with a unique workout setup in his backyard.

Swing sets, rope swings, hills, a trampoline and the foundation of the house all have played a role at one time or the other. Attached to the old swing set are a pair of rings rigged up for pole runs. Burnside simply gets a running start and practices his technique of keeping his “stick” in the correct slot. This is one of the most critical elements of any attempt. A vaulter can often times find themselves out of position before take off and not get their hands fully extended, according to Navy Track and Field Coach Larry Bartles.

The rope swing and trampoline mostly help with body control. Burnside said he prefers the swing to the trampoline for its increased mid-air simulation abilities.

Running up and down a hill aids with pole control during the run. Then his planting into the foundation of the house creates the closest thing to a pole bend and pit Burnside has seen in weeks. Sending the pole into the mat before the jump defeats the whole purpose, after all. So one can bet there have been many runs at the house.

Will all of this guarantee he’s immediately ready to go?

“Nothing we do is really going to be as good as the real thing,” he said. “It is not going to be easy transitioning, but it’d be exciting just to get the opportunity. Even the chance to just get to that transition would be awesome.”

It is likely Ritchie County’s Tre Moss, South Harrison’s Preston Peck and freshman teammate Kaden Smith, or other competition from around the Mountain State, are in a similar state of mind.

“I think a lot of the upper level pole vaulters are doing drills like this to prepare as well. They go on the internet and look for training videos and are doing it all not to fall behind. Reese has really taken responsibility here and as far as everything he is doing goes it may help his technique,” Bobby Burnside, his father and Doddridge County head coach, said.

This may equal bad news for his trio of competitors.

Before the COVID-19 pandemic forced the suspension of athletics, Reese received a few practice days to jump. He said he felt good and is on a mission to break the school record of 14-foot-6. It already happened once at his Amateur Athletic Union season at West Virginia University, but it wasn’t an official jump.

“I would like the opportunity, but is is out of my hands and I don’t really have a choice,” said Burnside.

One thing that won’t be out of his hands after all this work?