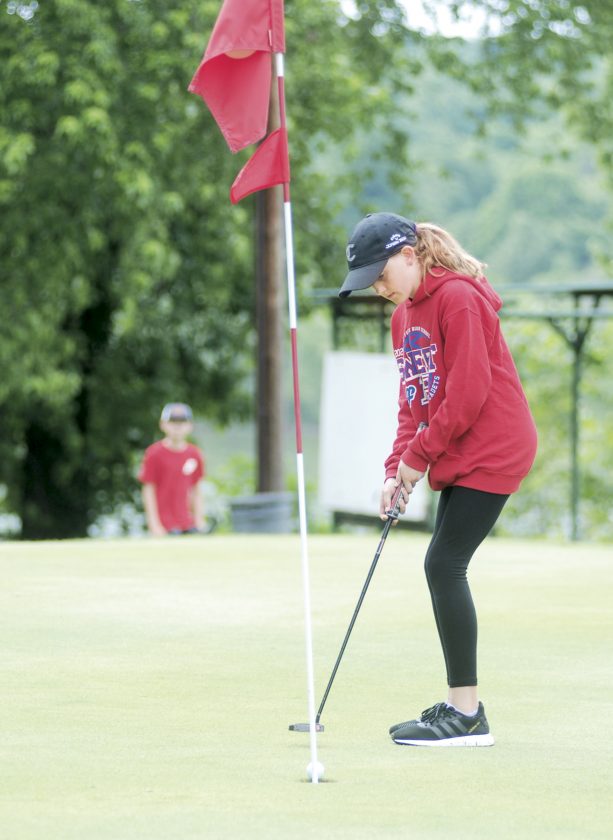 Photos by Jay W. Bennett Beverly’s Khoen Courson, who won the first event in the A Division at Mingo Bottom Golf Club, taps in for par while playing in the AA Division of Saturday’s Callaway Junior Tour Rookie League event at Minibel Par 3. Courson tied Elizabeth’s Izac Dotson with a 39 for runner-up honors.

Thanks in part to pars on No. 5 and No. 9, Walker finished with a 38 to capture the double-A division title.

During the first event at Mingo Bottom, Izac Dotson of Elizabeth was the champ, but he had to settle for runner-up honors with Beverly’s Khoen Courson after they finished a stroke back with 39s. Courson, who was the six-hole single-A victor at Mingo Bottom, had a trio of pars, but suffered a quadruple bogey on No. 6.

Kolson Camp, who will be in second grade at Blennerhassett, finished with a 27 to tie for first in the single-A division with Bentley Myers. Myers, who made par at the second, will be in third grade at Harrisville.

“It was fun,” Myers said of his round.

Camp was able to cap off his 27 with a par on No. 6 and replied “good” when he was asked how his day went.

In the triple-A division, five strokes separated the top six, but it was Ritchie County’s Logan Hilkey and Ryan Weekley who shared top honors after shooting 4-over par 31s.

“I like how it was close up and work on close range shots and stuff. I struggled a little bit, mainly off tee shots,” Hilkey admitted.

“I was just wanting to do good,” Weekley said. “I love to play golf. It’s a fun game and one of my top four sports.”

Ritchie County’s Dalton Edwards recovered from a double bogey at the first to finish in solo third place with a 32. His round featured five pars.

Kelan Lucas, who is going into eighth grade at Ravenswood, was a stroke back in fourth with a 33 thanks in part to pars at Nos. 1, 3, 4 and 5.

Rounding out the top five was Marietta’s Anthony Discini. He had pars on 4, 6 and 7 en route to his 34. Ritchie County’s Cole Darnold was sixth with a 35.

Only three other participants were in the double-A division. Madison’s Nolan Williamson had a 43, which was good for fourth place by one stroke over Drew Marling of Glen Dale. Olivia Buttrey of Williamstown had a 61.

Belpre’s Geno Crooks and Williamstown’s Harley Phillips had 35s to tie for third in single-A. There also was a tie for fifth with Elizabeth’s Kate Dotson and Charleston’s Wes Kenney shooting 37s. Williamstown’s Kendall Gant and Eli Reid of Parkersburg tied for seventh with 41s.

“We had some more numbers and seen some of the same faces with a couple of other kids,” said Brad Ullman, the executive director of the West Virginia Golf Association. “It’s great to see them out playing a par 3 golf course and know it’s good golf out here.

“I think the kids had a good time and again it goes back to introducing competitive golf to the youth. We had kids as young as 5 play and as old as 16. It’s an opportunity for them to learn and grow as a golfer.”

The CJRT Rookie League will take a week off before returning to action on Saturday, June 27 at Worthington Golf Club.