Time running out on federal installation tax credit for solar 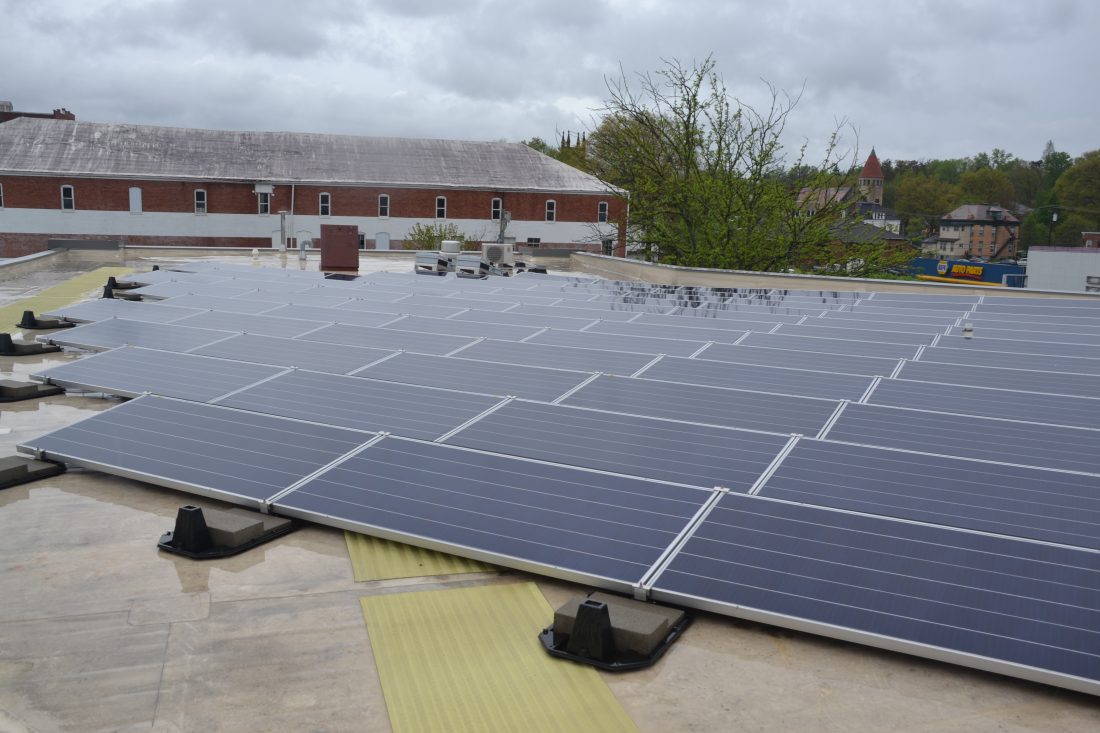 Photo courtesy of Patrick Brockmeier Treetops are reflected in the solar panel array on the roof of the Marietta Municipal Court building Friday. The solar panels generate about 40 percent of the building's electric power requirements.

With solar energy having become a mature technology that is becoming less costly each year, renewably-sourced electricity is now within the financial reach of most householders.

The clock, however, is ticking on a federal installation tax credit that has sweetened the deal for several years.

In Marietta, the city government has slowly adopted solar energy. The roof of the municipal courthouse is nearly covered with solar panels, with that installation having gone live almost exactly a year ago this Earth Day, and the city council Thursday night gave the go-ahead for another project to install solar panels on the streets garage.

City engineer Joe Tucker has been a proponent of solar energy for years, having installed it in his own residence.

“I’m pretty passionate about it, I really promoted and pushed this idea,” he said Thursday. “I was highly aware that the federal government has goals for renewable energy, to increase the percentage over the next several years, and the state of Ohio also has its own goals and guidelines, so I feel like local governments should be doing the same thing.”

Although the cost of installing solar panels has declined over the past several years, it’s still daunting for a municipality that doesn’t have much cash to spare. That’s where Pickering Energy Solutions came in.

Under the terms of a public-private partnership, Pickering installed 216 panels on the roof of the municipal court, enough to supply about 40 percent of its power needs. Pickering retained ownership of the system and was able to collect the 30 percent installation tax credit on the project, something the city was not eligible for. The court now receives two power bills, one from AEP and the other from Pickering, Tucker said.

The conversion, Tucker said, reduces carbon dioxide emissions by 107 tons a year. The solar-generated electric saves the city about $760 a year, which projected over the 25-year life of the contract – 20 years, with the option to renew for another five — totals more than $25,000, he said.

The streets garage project, Tucker said, involves installation of 132 panels expected to generate about 87 percent of the electrical energy needed by the maintenance facility, which is located off Ohio 26 east of I-77, and avoid 57 tons of carbon dioxide emissions.

Other installations in Marietta include an array on the First Unitarian Universalist Church, one on the Lafayette Square branch of the Washington County Public Library, the McCoy Athletic Field at Marietta College and The Armory downtown.

Chip Pickering has been one of the area’s strongest advocates for renewable energy. His engineering and architecture firm, Pickering Associates, operates a separate division for it, Pickering Energy Solutions.

His interest in the potential of solar energy began in Africa.

“I was in Liberia in 2006, after the war there, putting electric plans together,” he said. “In 2008, we had 55 solar systems, powering orphanages, schools, clinics, and I thought, ‘Why aren’t we doing this at home?’ I started Pickering Energy Solutions in 2012. I’ve installed solar at my home, in my mother’s home, we’ve installed about 25 systems around here, and we own and operate about a dozen of those.”

The city of Marietta is an example of a model that has become standard across the country, he said.

“The city can’t use the tax breaks, but we can, and they didn’t have $150,000 sitting around, so we partnered on the municipal court project. It offsets the cost of power and uses renewable energy,” he said.

The uptake for renewable energy depends to a great extent on the policy environment, he said. Comparing Ohio to West Virginia as an example, he said Ohio “probably has about 100 times the rate of install” because public policy offers some support for the technology.

“There are three states, about 100 cities and numerous corporations committed to achieving zero emissions. Some of them, like New York and Miami, are on ground zero of the impact of climate change, seeing flooding,” he said. “It’s going to be a lot cheaper to fix the problem before we have to deal with an impact in the future that we don’t really even know what it will look like.”

For individual homeowners, the technology has become less expensive.

“When I started Pickering Energy, solar panels were about $4.50 per watt generated, now it’s around $3,” Pickering said. “The scenario is that you pay up front with eight to 10 years of power bills to get 25 years of power.”

Loans are available for solar installations, he said, and in that scenario, the householder pays monthly on a 10-year loan instead of paying a power bill. After that, the electricity is essentially free – and generates no carbon emissions. It also buffers homeowners against future increases in energy costs.

Although it’s become easier and cheaper to go solar, it’s still a change that requires research and effort.

“This is a complicated system, it’s not like wheeling in a new refrigerator and plugging it in,” Pickering said. “Still, savvy people get it, people who have done the math. It’s not a small step but it’s easy and economical as it’s ever been. You’ve got to want to do it, but essentially you can buy 25 years of power for 10 years of cost. It’s an easy sell to engineers and architects.”

Dave Ballentine is one of those people, a retired engineer who recently completed a solar installation at his home in Newport.

“I retired in 2014, and shortly after that I volunteered to become an advisor to the city (of Marietta) on climate change,” he said. “I felt I had time to give to the issue.”

Ballentine also made the arrangements for installing a solar array on the First Unitarian Universalist Church in downtown Marietta. Through that example, he said, he’s been able to reach out to other nonprofits. Ballentine financed the project, in part because the church was not eligible to claim the installation tax credit, and he now has a power purchase agreement with it.

His experience with installing solar in his home has been that it was smooth, although the way the house is built allowed only 17 panels to be mounted. He said he might install an array on his barn in the future, which would take the generating capacity up to 100 percent of his electricity usage and enable him to convert his gas appliances to electric, achieving a zero emissions footprint for his energy use. AEP Ohio, his electric utility, “is very accommodating for solar conversion, and I’m very thankful for that,” he said.

Pickering pointed out that the U.S. is the only developed country in the world not to have signed the global climate accord, despite the most recent National Climate Assessment, issued in 2018, which indicated in no uncertain terms that the pace of action to mitigate climate change must be stepped up by several orders of magnitude to avoid catastrophic effects.

“At some point, you can either take action now, or explain to your grandchildren why you didn’t,” he said. “The technologies are here, they’re all economical, and it takes a little effort but you can live your life for no extra cost with carbon-free energy.”

• Where: The armory lawn.

Some of the installations in Marietta: