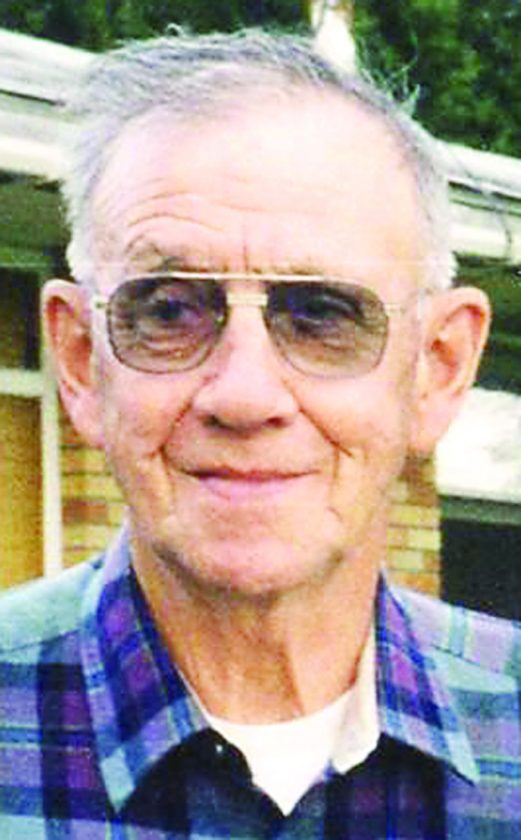 Imagine bailing out of a flying fortress at 20,000 feet.

¯ Mission 8: Merseburg: Rough as usual. One blew up in front of us, and pieces of plane almost got us. So did flak. 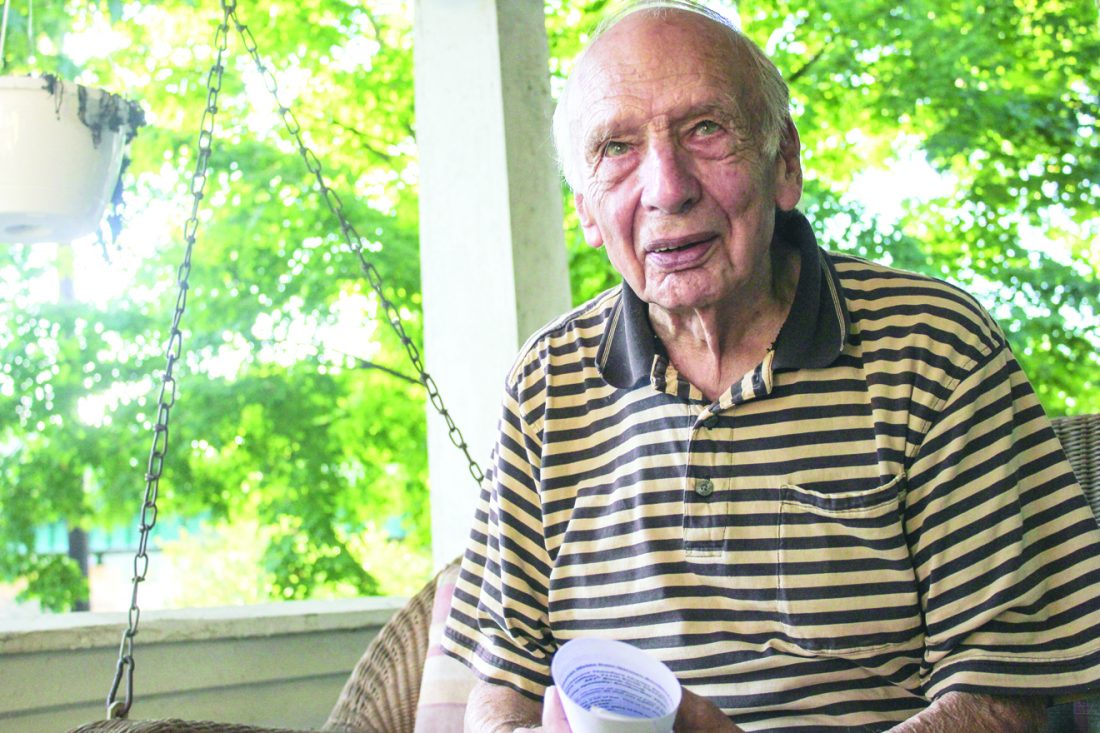 Photo by Janelle Patterson Theodore C. Bauer, 98, of Marietta, recalls memories of World War II as he explains his military experience from his front porch on Thursday.

¯ Mission 14: Merseburg: Scared to death as usual. But somehow got through. Plenty of flak, could walk in it.

¯ Mission 24: Frankfurt: Talk about rough! Got engine shot out, oxygen shot out, caught fire and went into dive, but pulled out just as we were ready to bail out. Fire miraculously went out!

“It was an ugly plane, that flying fortress,” said Theodore “Ted” C. Bauer, 97, of Marietta, the author of the notes above. “But we just dreaded going to Merseburg. We knew it was heavily defended — I had never heard of it before the war. But it was awful.”

On Nov. 1, Dye, Bauer and two other World War II veterans, Staff Sgt. Donald P. Stewart and Private First Class Gordon F. Pape, are to be recognized among 15 veterans as inductees into the 2019 Washington County Veterans Hall of Fame.

“We’re excited to honor and give recognition this year,” stated Robert Fitzgerald, executive director of the Washington County Veteran Service Commission. “This year, the board of commissioners has inducted more veterans than the previous year and added civilians and businesses who honor and serve our veteran community, too.” 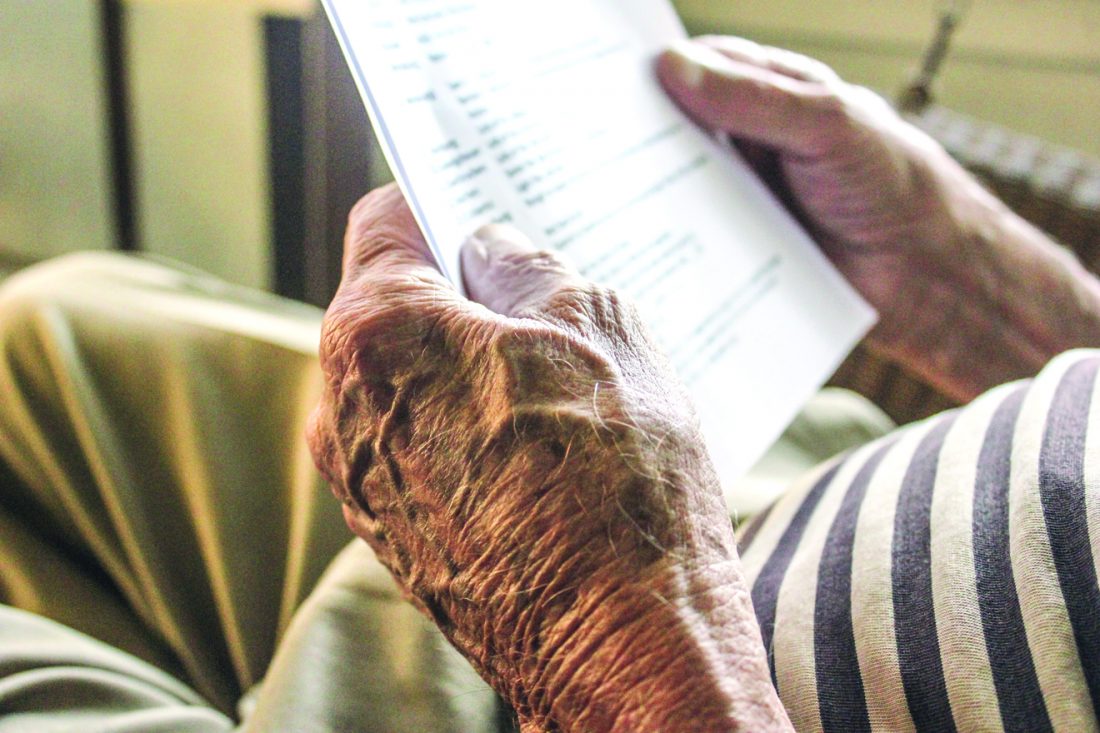 Pape and Stewart are to be awarded posthumously for their service, as is Vietnam War veteran Robert Hill.

The Hall of Fame induction was launched in 2018 when local veteran service commissioners sought to recognize not only the war stories but also the accomplishments of this area’s citizen-servants, echoing the mindset of Lucius Quinctius Cincinnatus ceding military power at the close of crisis.

“We couldn’t wait to get home,” said Bauer. “All of a sudden, you’re putting on your ‘civies’ instead of the khaki’s.”

Home to build families, lives, careers, and continue serving their communities through farming, business and even journalism.

“It’s always great to see not only our veterans honored for their service, but embraced and recognized by their families for that service in their home community as well,” said Fitzgerald. 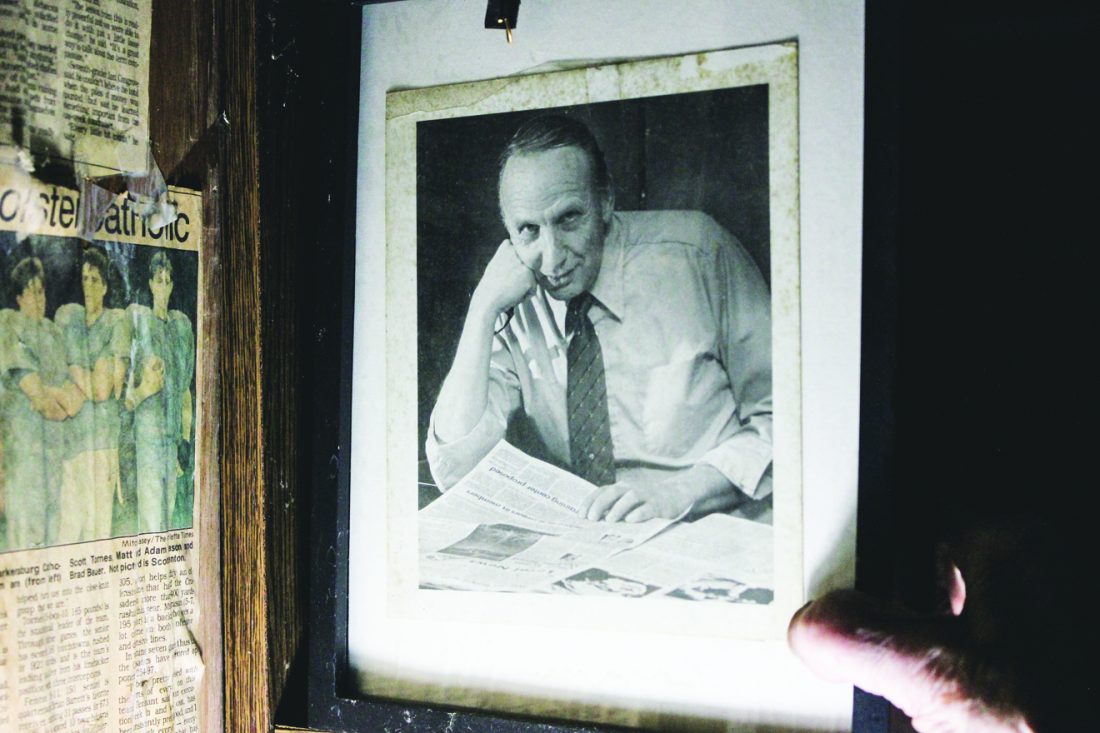 Photo by Janelle Patterson Ted Bauer is a retired journalist and city editor of The Marietta Times.

World War II, a two-theater conflict that drew in more than 30 countries’ young servicemen to fight, suffer and die on battlefields far from home, is still vivid in the minds of the two war veterans approaching their centennial horizons.

“I was forced to march all the way across Germany,” he recalled. “It was a very cold, very cold winter to march some 500 miles.”

Bauer still recalls the fear of smoke billowing ahead, still respecting the marksmanship of German gunners on the ground aiming for his bomber and the surrounding planes in formation.

“We had terrible, awesome machines in those B-17 bombers, but the Germans were trained too,” Bauer pointed out. “If they could clock our altitude, it could end terribly. They could send flak through our engine, our wings; if they caught our oxygen, it was a bad day.”

And the two were humbled by the notice of county recognition for their service.

“I don’t want to give a speech or anything, just say thank you and go sit down,” Bauer said quietly as he smiled sitting on his front porch in Marietta Thursday.

“It’s quite an honor to be selected, I’m not sure what to do,” said Dye.

But how does one survive the onslaught?

The memories of cold nights, friends falling from the sky, the fires?

“I didn’t ever much talk about it, I never had a reason to,” Dye continued. “It was just the last two or three years I started to talk. After kind of holding it in all those years.”

Bauer said he still tries to recall the names of the towns he was sent on missions to bombard.

“Some of these places you’d never heard of before, and I haven’t heard of since,” he explained as he sat for the first time reading his mission notes typed, instead of written in his own pen.

Those mission notes were included in the nomination submitted to the Washington County Veteran Service Commission for consideration of Bauer to the Hall of Fame.

Notes for Staff Sgt. Stewart and Private First Class Pape include in the nominations from family members their humility in returning from war as well.

“Frank (Pape) was a local farmer,” wrote nominator Kristen Haynes-Wickline. “Frank was involved in the infamous Battle of the Bulge, and at 5:36 a.m. on Dec. 16, 1944, his unit was attacked by an artillery barrage by Germany.”

Two days later, Pape was taken as a prisoner of war and survived the conditions of moldy biscuits, digging graves and repairing infrastructure until his release on May 14, 1945.

“Once he returned, Frank worked for 27 years as a rural mail carrier for the U.S. Postal Service in Marietta,” wrote Wickline. “(He) continued to farm for the rest of his life.”

Stewart’s nominator, Mary Jo Sexton, submitted Stewart’s own notes from the war as part of the application.

“I had three attacks of malaria and two bouts with Diptheria,” he explained. “My best friend and I were sent to a farm workgroup at Mossin, Germany…During this time, we did all kinds of farm work.”

Lost in his writings are any glamour associated with the war effort.

“At one time in late fall, we were picking up potatoes to haul into the shed for sorting. I helped my friend finish his row after being forbidden to do so,” he continued. “The guard put his rifle barrel to my temple all the time, screaming that he was going to shoot me. Needless to say, he did not. I have one eyewitness still living to verify and swear to this. All the rest are dead. I have dreams, nightmares and flashbacks of this event.”

But each returned home, carrying those memories on into their lives as civilians, knowing the ‘flak’ they could catch at home was no match for what they had survived abroad.

“That’s what a milk run is,” described Bauer. “It means an easy mission.”

“It means you didn’t get shot at,” he concluded.

This year, inductees will be honored at the Dyson Baudo Recreation Center on the Marietta College campus.

Social hour will begin at 5 p.m., with the induction ceremony beginning at 6 p.m.

Families of each veteran and civilian to be honored will be invited to attend.

The Marietta Times will continue to feature inductees of this year’s hall of fame through the induction ceremony.

Photo by Janelle Patterson Theodore C. Bauer, 98, of Marietta, recalls memories of World War II as he explains his military experience from his front porch on Thursday.

Photo by Janelle Patterson Ted Bauer is a retired journalist and city editor of The Marietta Times.