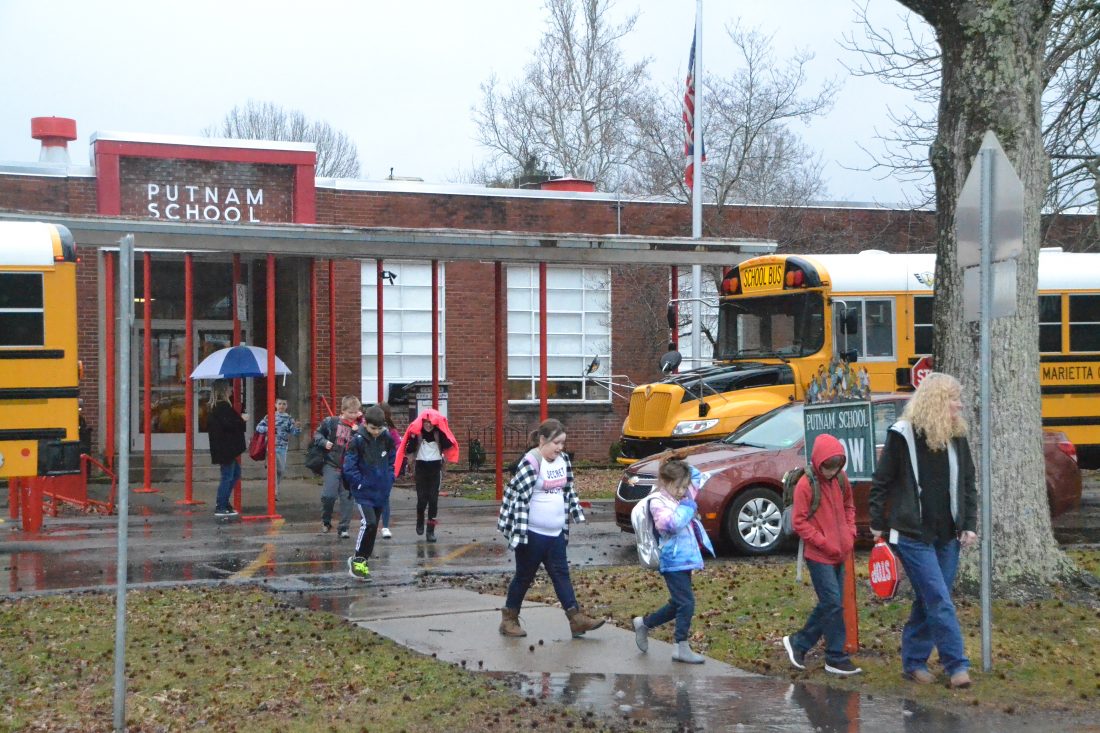 Photo by Michael Kelly Students come out of Putnam Elementary School at dismissal time Wednesday afternoon. The school is marked for closure after next year as a result of a consolidation plan adopted by the Marietta City Schools board of education this week.

Response has been subdued to the short-term consolidation plan adopted Monday by the Marietta City Schools board of education, which would close two of the district’s elementary schools before the start of the 2021-22 school year.

The plan, generally known as Option No. 3, would place all kindergarten, grade one and grade two students in two elementary schools – Washington and Phillips – covert the Marietta Middle School building to a four-grade intermediate for students in grades three through six, and move grades seven and eight into Marietta High School.

The board decided to wait a full school year before implementing the system.

The closure of Harmar and Putnam elementaries was not unexpected, as they are the smallest buildings in the system.

Deanna Shuler, who has two children at Harmar, said she regrets the prospect of Harmar being shuttered but understands the logic behind the board’s decision.

“It’s realistic, it was clear that something needed to be done. Harmar was just as likely as any of the others to close, but I try to see the bigger picture,” she said.

The district has been working toward a consolidation plan since November, when a proposal to build new schools on Washington State Community College property was rejected at the polls. The district’s buildings, with a capacity of more than 4,000 students, are aging and oversized for the current enrollment, which is about 2,500. The district is facing continuing deficits as it struggles to control spending on maintenance and utilities for the six buildings.

“The bigger disappointment was that the levy didn’t pass,” Schuler said. “I knew then that one or more of the schools would have to close.”

Shuler said she chose Harmar for her children, one in grade three and the other in grade five, because although they live in the Warren district, the Marietta school was closer to home and to work, and the school’s teachers and principal had a good reputation. The children have been attending Harmar since they were in grades one and three.

“We have not regretted it, we love Harmar and I’m happy we’ve had a few years there,” she said.

She said her children have mixed emotions about the change and she has explained it carefully to them. Her son, the elder child, she said, attended a board meeting as part of his Boy Scouts program.

“It doesn’t feel as different for the oldest, he will be going to middle school next year anyway, and my daughter has one more year at Harmar,” she said. “But it helps knowing they won’t be losing friends, that they will all go through the same change, staying with their classmates, just in a different place, all of them experiencing something new together.”

At Putnam school Wednesday afternoon, Brittany Schramm waited for her fourth-grade son to come out of the building at dismissal time. With one son in fourth grade and another in seventh grade, she said, the effect on her children will be minimal.

“I’m happy they won’t be that affected, we’re sort in that sweet spot,” she said. Her fourth grader will get to complete elementary school at Putnam, and her seventh grader by fall 2021 would be going to the high school in any case.

Schramm said it’s good to have some certainty about the district’s plans, but with the possibility of another building levy vote in November, it may not be over yet.

“They had six options, which means that none of the plans really stood out. Is this actually the plan now? I don’t really feel like it’s settled yet,” she said. One part of the plan she said she dislikes is the use of portable buildings at the high school.

“They’re supposed to be temporary, but in my experience they get used a lot longer. In the district where I lived before they had been there since the 1980s,” she said.

Schramm said she lives in the Washington district but enrolled her children in Putnam.

“I like it here, my sons loved it, it’s more of a traditional set-up, it just feels good,” she said.

The public discussion prompted by the district’s outreach for ideas after the failure of the building levy could have some benefit in the future, she said.

“Maybe the levy will pass the next time, now that people have seen what will happen without it,” she said. “I feel like the district soft-pedaled what might happen if it failed. I’m not blaming anyone, I know the administration and teachers are working really hard on this.”

Inside the school, first-grade teachers Pam Stephanik and Jessica Smith were in a planning period.

“I think this can be a very good thing,” Stephanik, who will retire next year, said regarding the consolidation plan. “There will be more collaboration among teachers, they can equalize the class sizes, and a very positive aspect is that the kids from Putnam will get Title I services.”

Putnam, because it does not have enough economically disadvantaged students, does not qualify for federal Title I support, which would pay for specialized reading and math instruction for struggling students. Stephanik and Smith said their students get additional help they need with the assistance of a qualified and competent teacher aides, but not a certified Title I teacher.

Smith said the consolidation will provide better service for students.

“It’s my sixth year here, and I hate to see Putnam go, but it will be great being able to be with other teachers,” she said.

Note: Projections for middle and high schools are based on current enrollment moving to other schools and do not account for any increases or reductions in student numbers in the coming year. Elementary school projections provided by Marietta City Schools administration