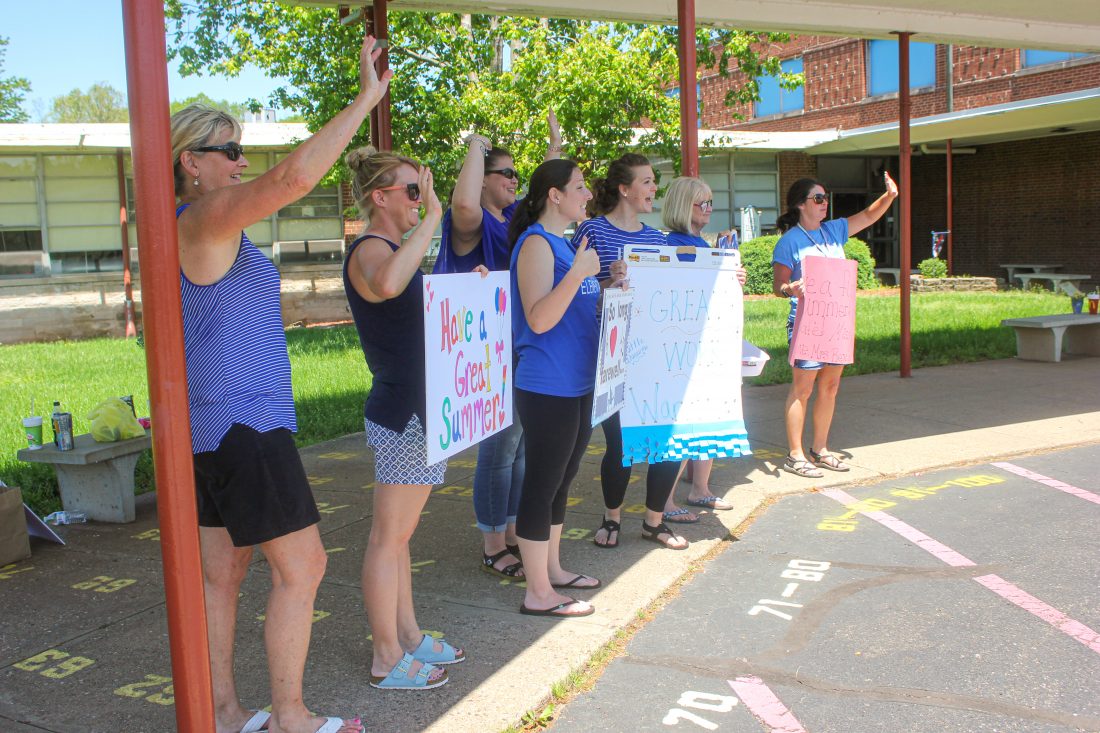 Photo by Janelle Patterson Warren Elementary teachers wave goodbye outside of the building which is scheduled for demolition in Tunnel Tuesday.

Photo by Janelle Patterson Emily Northrop reaches toward her eighth-grade handprint from the honored wall in the cafeteria of Warren Elementary School Tuesday.

Photo by Janelle Patterson Warren Elementary teachers wave goodbye outside of the building which is scheduled for demolition in Tunnel Tuesday.

TUNNEL — The building will never again echo with student laughter, songs and the bustle of a full cafeteria.

Its hallways are currently lined with moving boxes filled with curriculum and tools for next school year.

On Tuesday, Warren Elementary teachers, lunch staff, bus drivers and administrators waved goodbye to 228 students picking up the district’s final meal distribution, but they were also bidding adieu to the community elementary building scheduled for demolition this fall.

“I just hope our kids remember that we love them and know that we’ll be together somehow next year,” said Emily Northrop, 24, of Warren Chapel.

Northrop taught first grade at Warren Elementary, within the same walls where she was a student teacher while in college, and under the same roof where she attended the school from kindergarten through eighth grade. Most recently, the building high on a hill along Ohio550 was used as a K-4 building. 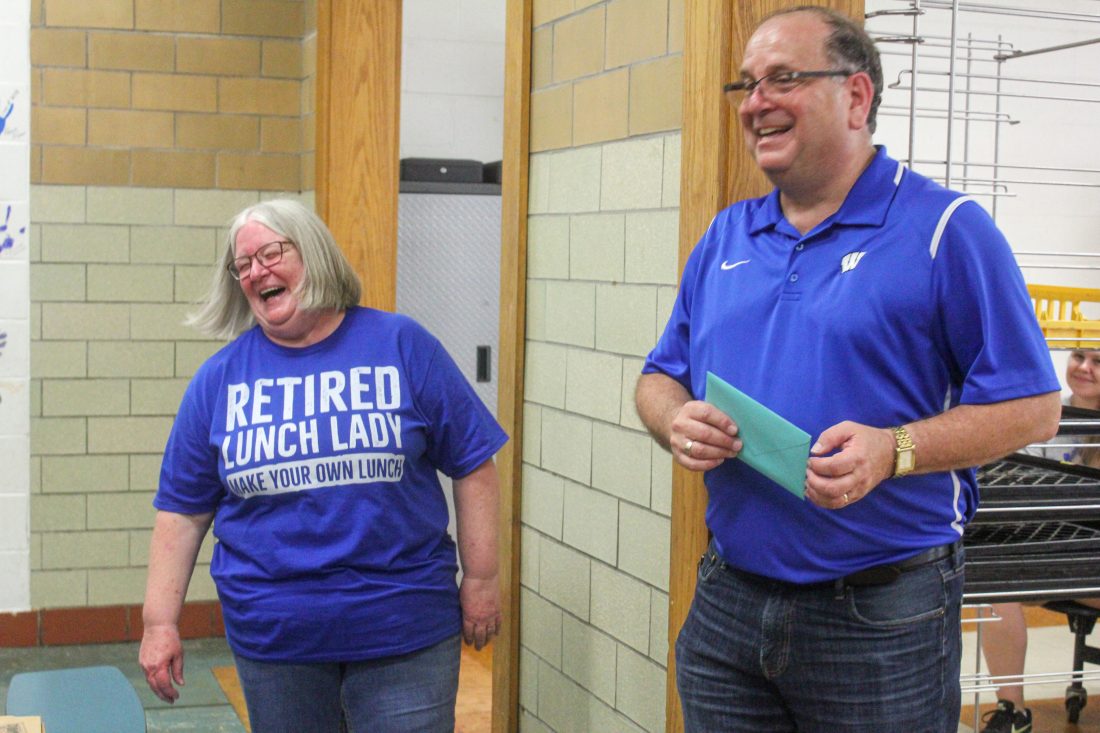 “My kindergarten teacher is still here so that was fun to get to come back to,” laughed Northrop.

Her painted handprint is even still on the cafeteria wall, until demolition this fall.

The memories of the building are happy, though bittersweet, shared other teachers as they met for an appreciation luncheon after the drive-by caravan with their students concluded.

“Make sure to get your rest this summer, because you’re going to need to be rested next year,” guided Principal Joe Oliverio.

What a fall semester will entail, with grades, potential distance learning and pandemic precautions, has yet to be determined. 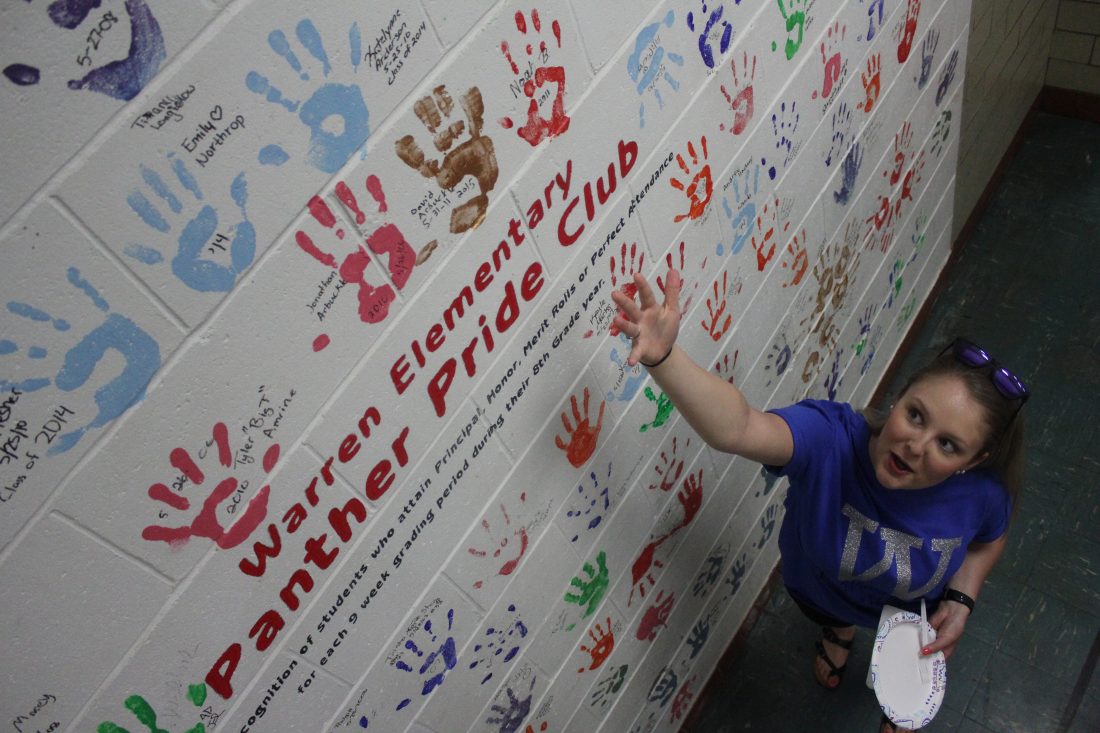 But the building’s retirement and demolition are still scheduled, after the teachers and staff move to the single campus combining with staff of Little Hocking elementary, Warren Middle School and Warren High School as a singular Warren Local campus.

Warren Elementary Head Cook Diana Seaman, 65, of Fleming, will not be moving with her coworkers, but that doesn’t mean she won’t be seen.

“I’m retiring, I don’t have to get up at quarter to 5 anymore,” she laughed, wearing a bright blue T-shirt Tuesday reading: Retired Lunch Lady, Make your own lunch.

But all the grandkids live around Seaman’s farm and are school-aged, so instead of 400 cookies in the oven at a time, she’ll simply bake for them and the occasional special event, she said.

“The first day I ever subbed here it was taco-in-a-bag day and that was when we still baked a lot from scratch,” described Seaman. “I made 400 snickerdoodles that day. But the times have changed a lot.” 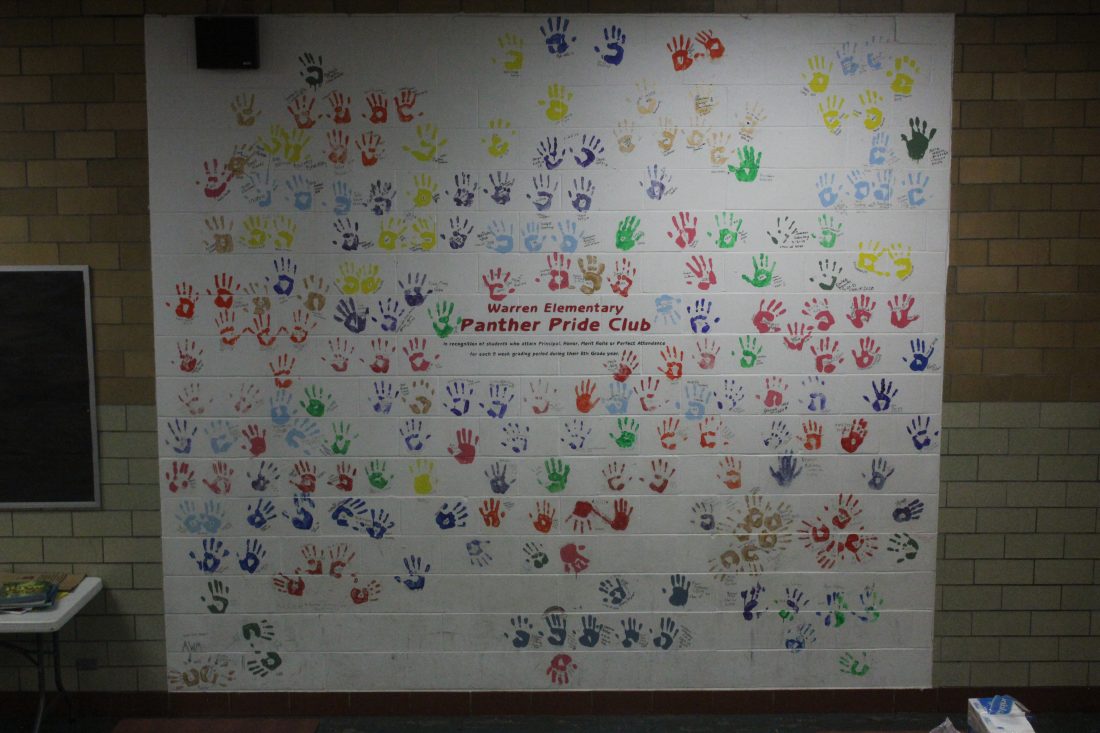 While many of her fellow building-mates taught from home via video conference in recent weeks, Seaman still worried from the building about her “adopted” grandchildren.

“You couldn’t predict week to week how many meals the kids needed, but they have to eat and we used to feed them breakfast and lunch every (week) day,” said Seaman. “Every day in here was good, sure you had students once in a while who would give you the attitude look but you give them the mom look right back and we’re good.”

After 20 years with Warren Local, Seaman said she’ll still be part of the district family.

“What’s really funny now is from those kids I taught in preschool all those years ago, their kids are now coming here in my cafeteria,” she explained. “And my oldest son married one of my preschool students.”

That community, Northrop said, will remain, just shifting to the single campus next school year. 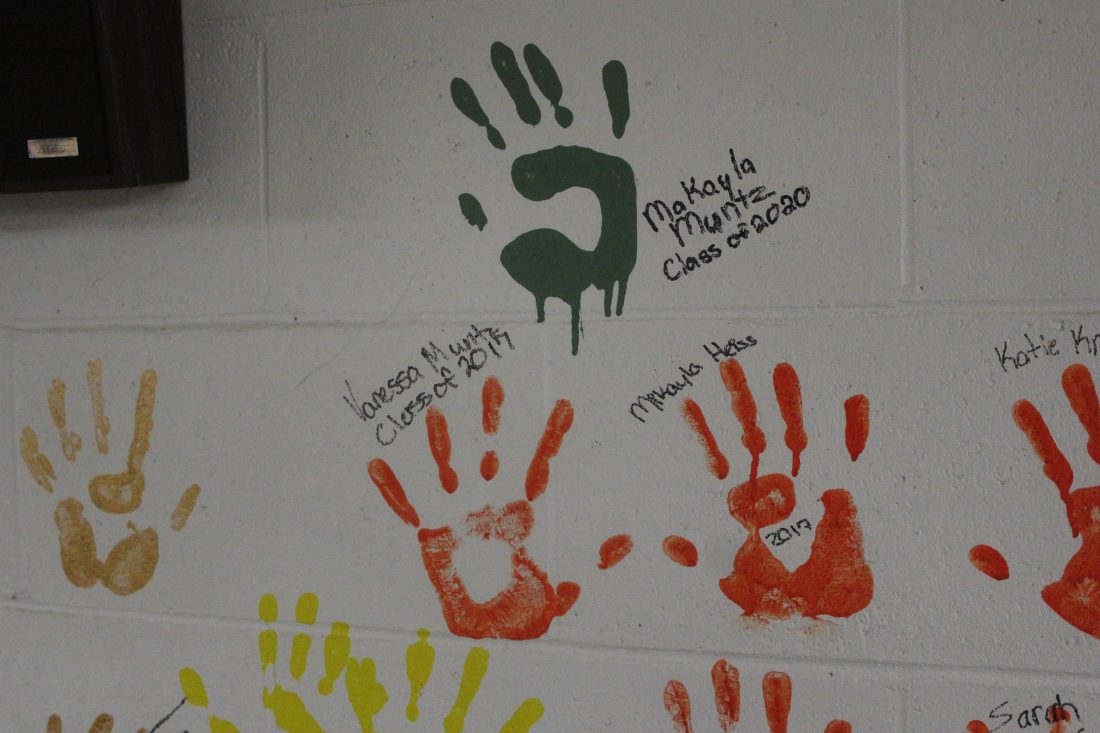 “And though we lost that closure of the whole planned production, that social-emotional connection, we saw kids today that we haven’t seen for the weekly food distribution and some of the kids we have been seeing weekly, we saw actually smile today when they got to say goodbye to their teachers,” said Oliverio. 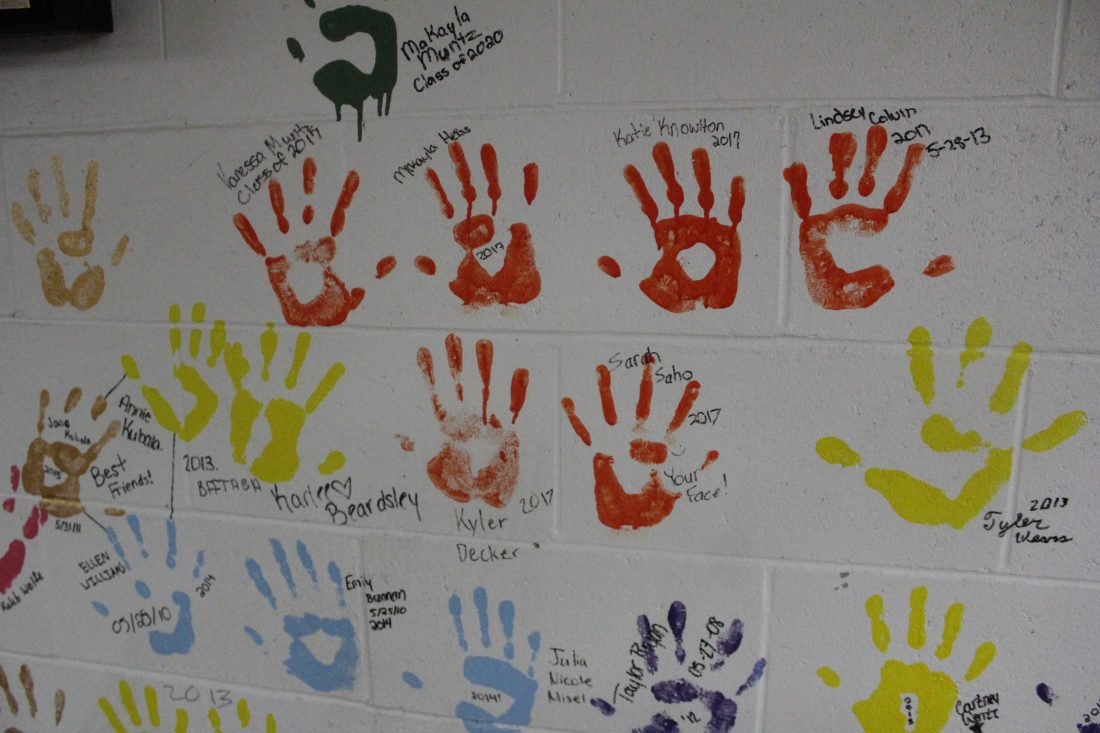 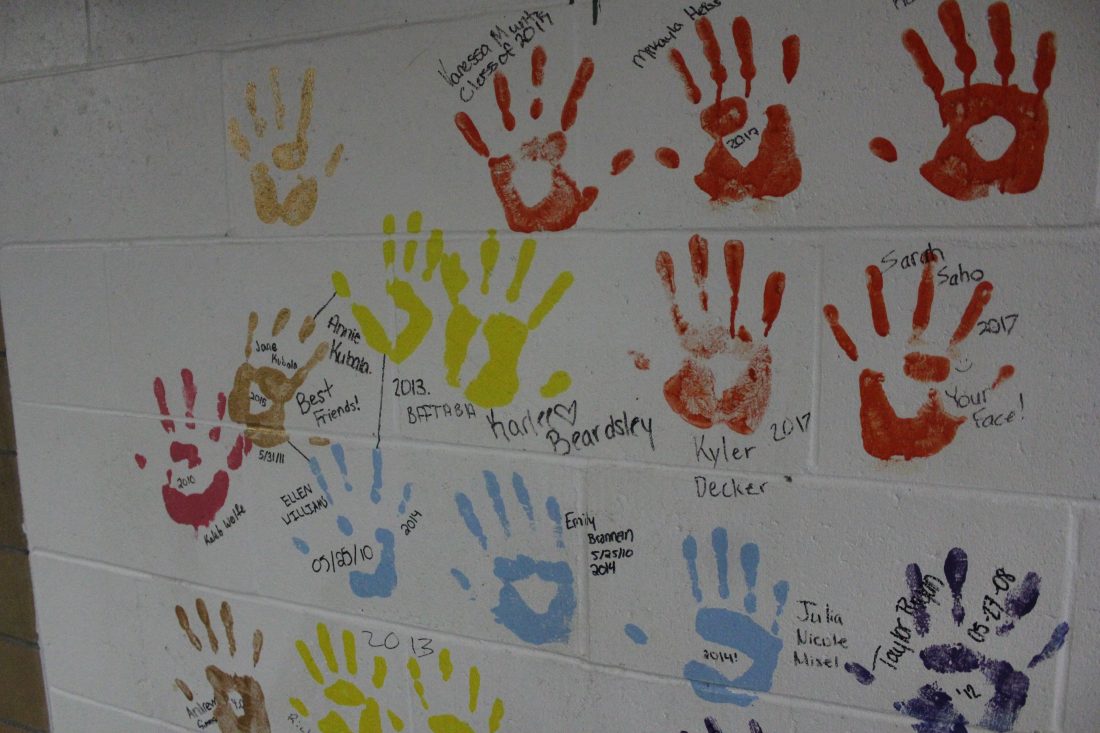 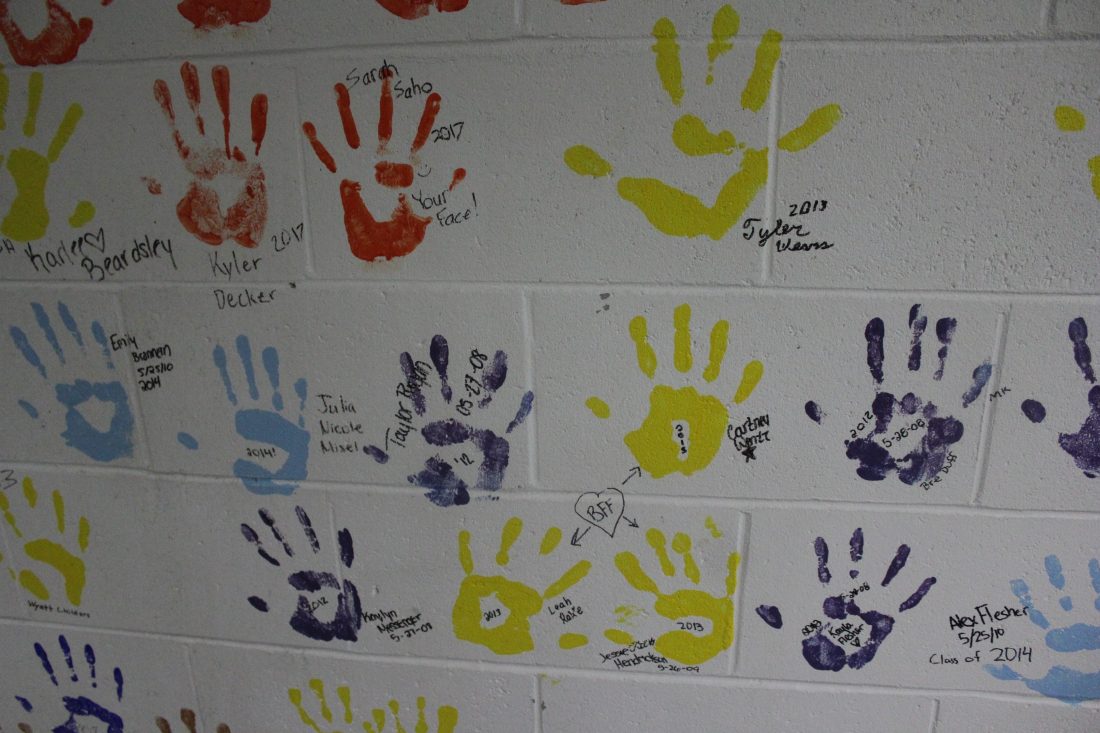 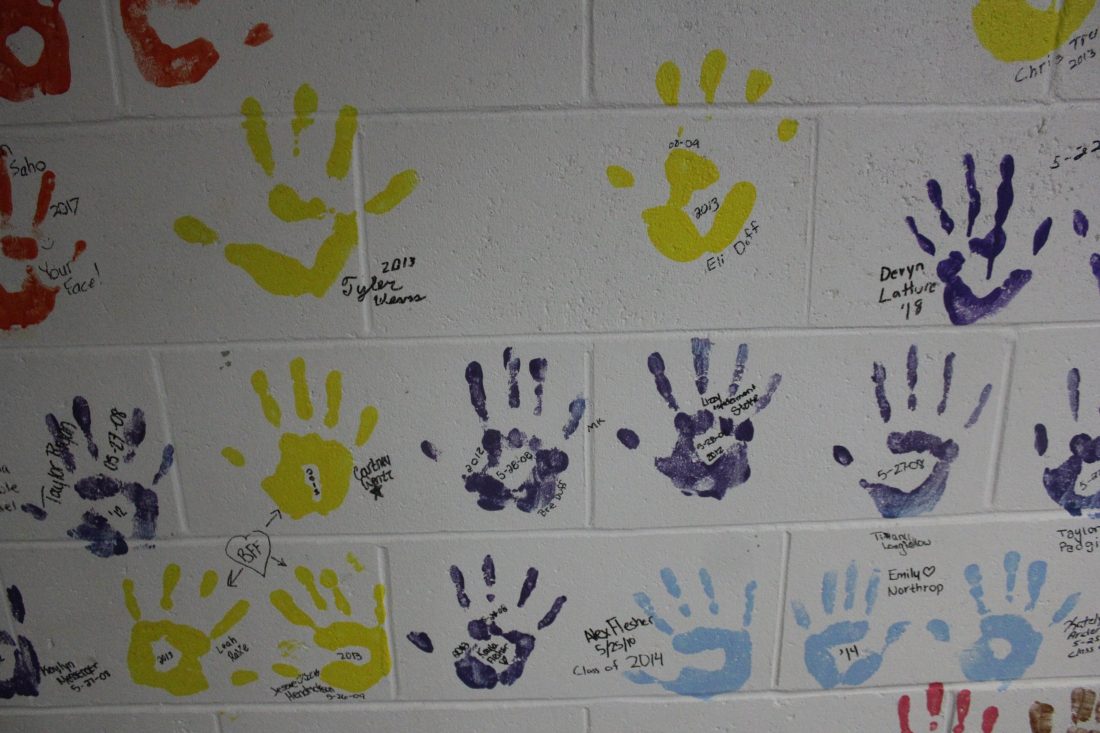 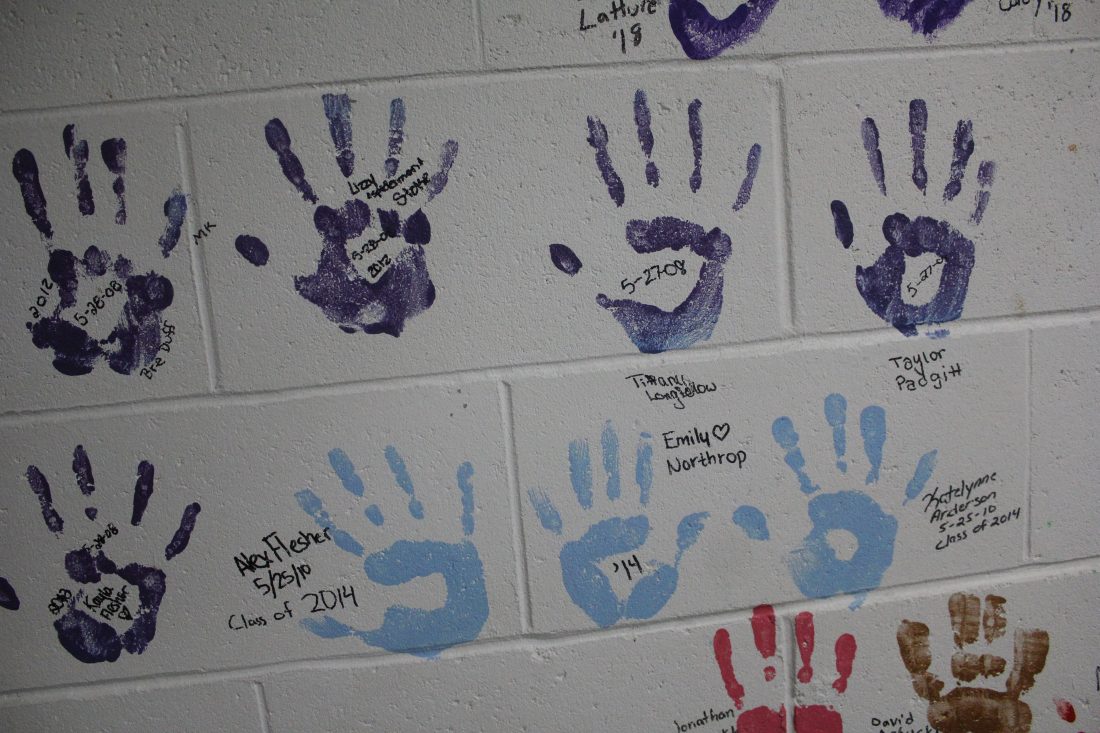 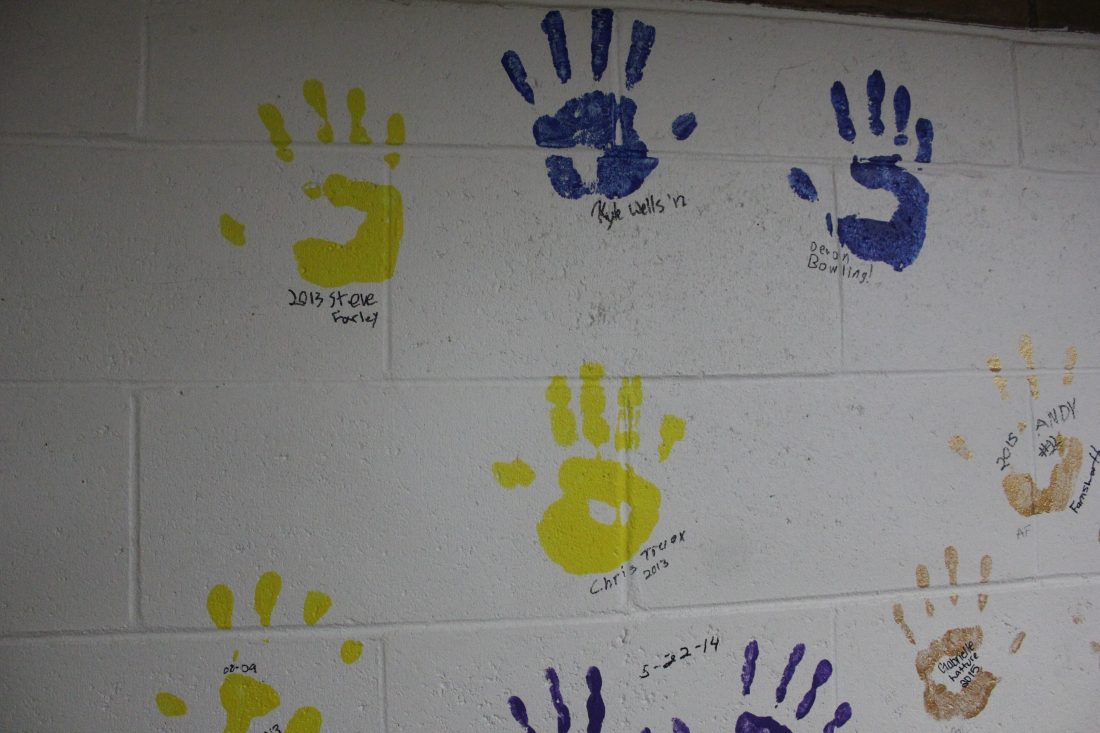 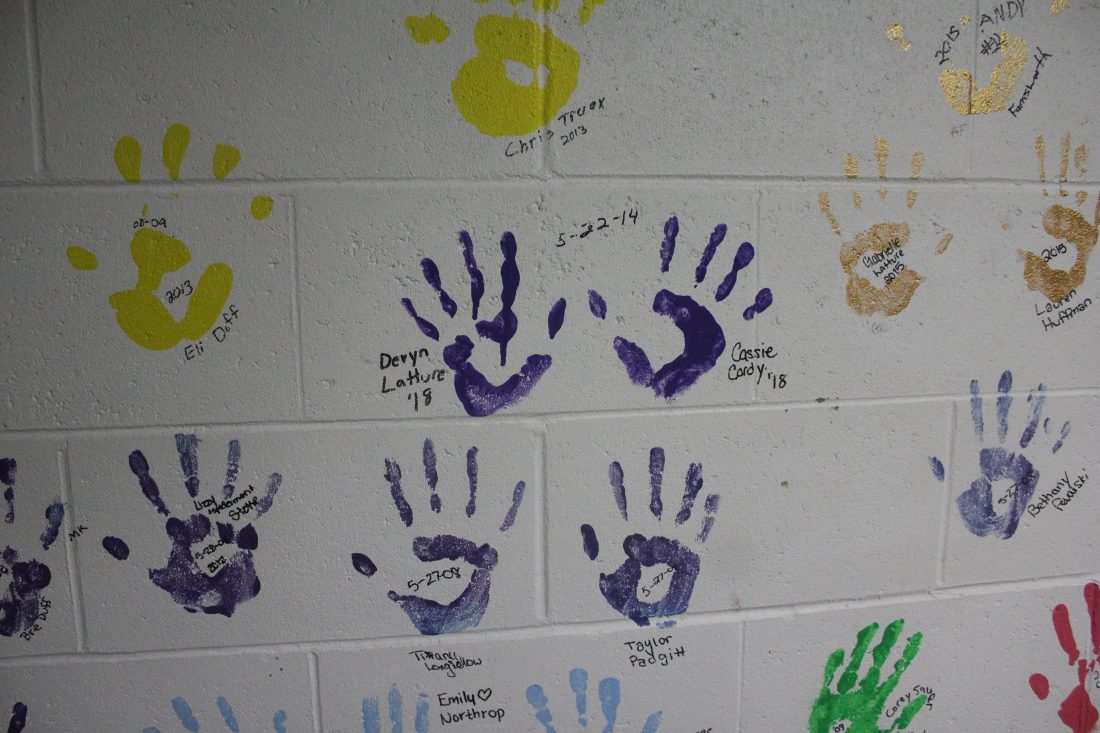 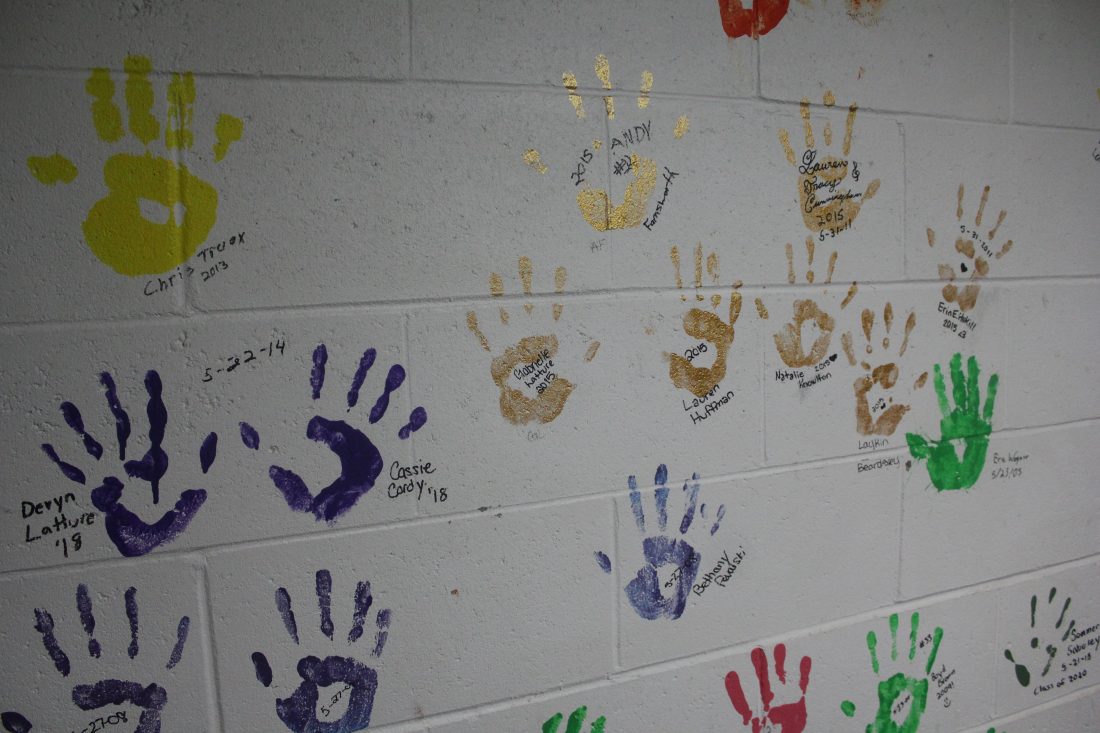 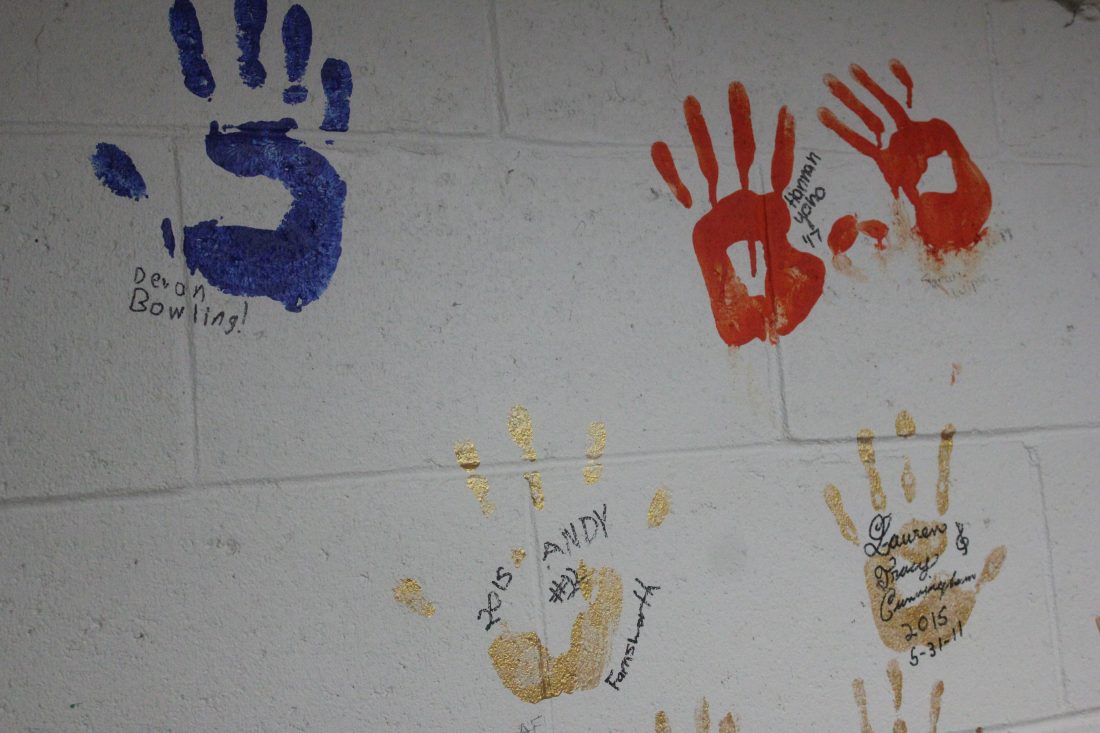 Photo by Janelle Patterson Emily Northrop reaches toward her eighth-grade handprint from the honored wall in the cafeteria of Warren Elementary School Tuesday.