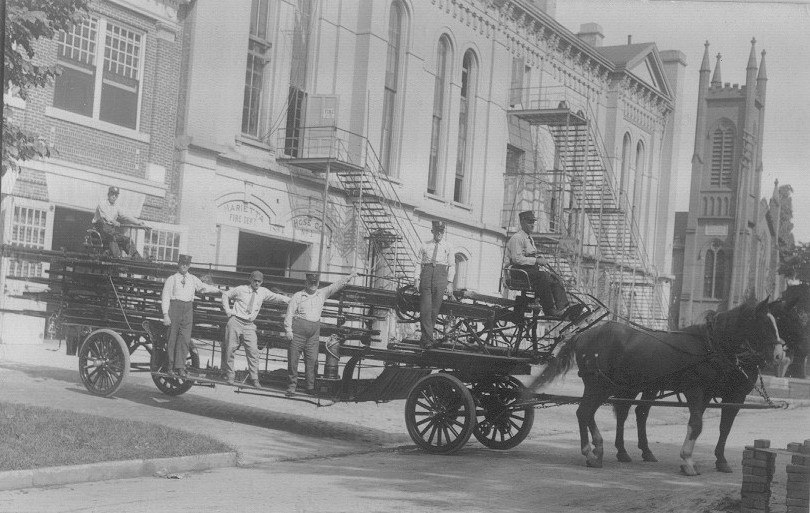 Photo submitted by Marietta Fire Department The Hook and Ladder are seen at fire station 1 in 1911.

Photo submitted by Marietta Fire Department The Hook and Ladder are seen at fire station 1 in 1911.

It’s been 125 years since the Marietta Fire Department was established as a paid fire department, and a lot has changed over the years.

Station 1 became a paid department on Dec. 1, 1894, at its current location on Putnam Street.

“We had horse-drawn apparatus. In 1912 was the first motorized apparatus that came into the fire department,” said Chief C.W. Durham. “By 1918, we had switched over to completely motorized and the horses were retired.”

He said in the early days, firefighters had limited resources.

“They had a horse-drawn wagon with water on it. A lot of times the call would come in to what would be called a fire box,” Durham said. “It would be a pole station somewhere in the community. People would pull that box and firefighters would just have to take their response to that location and then look around to see where the event was.” 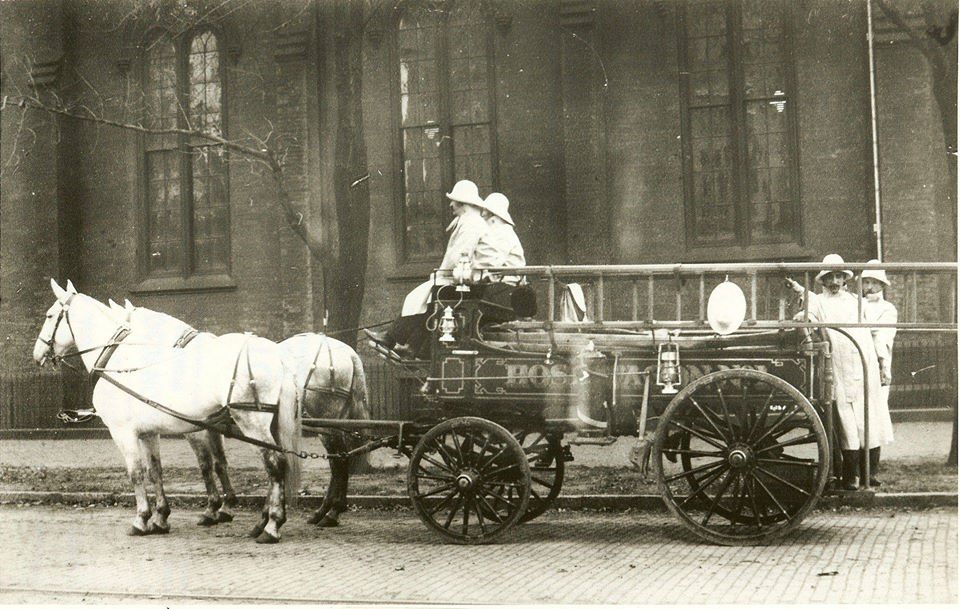 One thing that may not have changed over the decades is the dedication of the Marietta department, with many saying the career is a calling.

Lt. Eric Moore said he wanted to be a firefighter because his best friend’s father was chief at the Little Hocking Volunteer Fire Department.

“I grew up kind of exposed to the fire service from a young age,” he explained. “Every time you hear a siren go by, I’m always like ‘they’re playing my song.'”

What those early members wore to keep them safe from fighting fires was also quite different.

Durham said it was quite a while before respiratory protection became an everyday part of the equipment.

“That’s something we’re very focused on…keeping our members healthy and making sure to protect them from that smoke when we do go into a building,” Durham explained. “There are a lot of carcinogens that exist in that fire smoke nowadays.”

He said back then, there was true wood smoke, but there are plastics and polymers that exist in today’s materials.

The year 1930 brought about Station 2 at the corner of Putnam Avenue and Franklin Street. It closed as a fire department in 1986.

Station 3 opened at Colegate Drive and Glendale Road and Station 4 opened on Harmar Hill in 1972.

“We try and cover all of the technical areas of the fire service. That’s why we have confined space rescue, hazardous materials, trench and high angle rescue,” Durham explained. “We have personnel that are on the dive team, as well as all of our members who are able to go out and do water rescue on the fire boat that we have on the Muskingum River. And then of course, we are currently increasing our staffing to where someday in the near future, we all will be advanced EMTs as well as firefighters.”

He said all the firefighters are currently EMTs and transitioning to advanced EMTs allows them to start IVs and administer several more medications to better treat patients.

Not only equipment has changed over the years.

“One of the big shifts would be on fire prevention and education. We try and get out to all the schools to do fire safety presentations as well as tours into the fire station to try to get the fire prevention message out,” Durham said. “We also have an inspector that goes around to local businesses to make sure that not only are they safe, but their customers are safe as well.”

He said the fire service is ever-changing.

“We are constantly seeking new ways to more safely and more effectively perform our jobs, so we’re constantly re-evaluating all of our processes, from our trucks, to all of the details that come with the trucks, to our training,” he explained. “We’re constantly finding new training sources that allow us to keep current with the dangers and risks that exist in our community because we want to be prepared if any of those events do occur.”

The Marietta Fire Department has a total call volume of around 3,500 calls per year, which includes 400 fire calls for house fires, car accidents and fire alarms. The total number includes EMS-related calls, which are a substantial portion of their call volume.

“(Total call volume) has dramatically increased by 135 percent over 40 years ago,” Durham said. “We see that demand for service climb each year.”

In the future, the department is working on being prepared for anything.

“We have made a lot of changes to make sure we’re prepared for events like the derecho that we had and large storms. We make sure we’re prepared to respond to the community even when everything else stops working at the time,” Durham said. “With electric going out, we lose a lot of things like power to the stations. We have to have all of those backup plans for everything from our radios to our fuel source to being able to keep the trucks moving for a large event that may occur over several days. We make sure to have those backup plans in place so that we’re able to respond.”

The backup plans include a lot of training.

“We do the basics of our firefighter training and our EMS training. Our certificates require every year that we have so many hours of each, but then we get into a lot of other areas where we recently did ladder classes and elevator classes,” Durham said. “We have an upcoming bomb class. Things like that that we’re trying to cover all the bases for things that could occur.”

One thing that hasn’t changed over the years is the love the firefighters have of the job.

Firefighter Matt Hively started out as an officer for the Williamstown Police Department, but he said he loves his current job.

“I think it’s the excitement of being in an environment you aren’t supposed to be in. Even after 22 years, plus a couple of years as a volunteer… I don’t care what city I’m in, when I see a fire truck go by, I still get excited like a little kid. It’s still cool. I don’t care who says what,” he said with a laugh. “Not too many people can say they like their job after 20-some years. I still enjoy coming to work.”

He said there are times when he feels a little nervous, but it helps keep him alert.

“In all honesty, if you ever get to the point where you think you’re not a little bit nervous, you probably shouldn’t be doing this. There have been very few times with a possibility of trapped victims that always kind of…you have your ‘normal’ emergencies, but these kind of up the ante,” he said. “Now there’s real-time critical because someone’s life’s on the line. Occasionally in a car wreck, you realize there’s a mangled body trapped in there and it gets adrenaline pumping.”

He’s never thought twice about being a firefighter, he said.

“I can’t say I’ve ever come back from a call and said ‘I don’t want to do this anymore,'” he said. “Some guys have, and it’s perfectly normal.”

Moore said he also doesn’t think about being nervous or afraid of a situation.

“You don’t think about it that ways. Your training kicks in,” he said. “Your training takes over to a certain extent until the call is complete. I guess a healthy fear would be a good way to put it. You’re looking out for the safety of yourself and others.”

He said he’s never thought twice about being a firefighter, but there are times when he thinks “I don’t want to see that again.”

“There were never questions about whether I wanted to come back to work the next day,” Moore said.