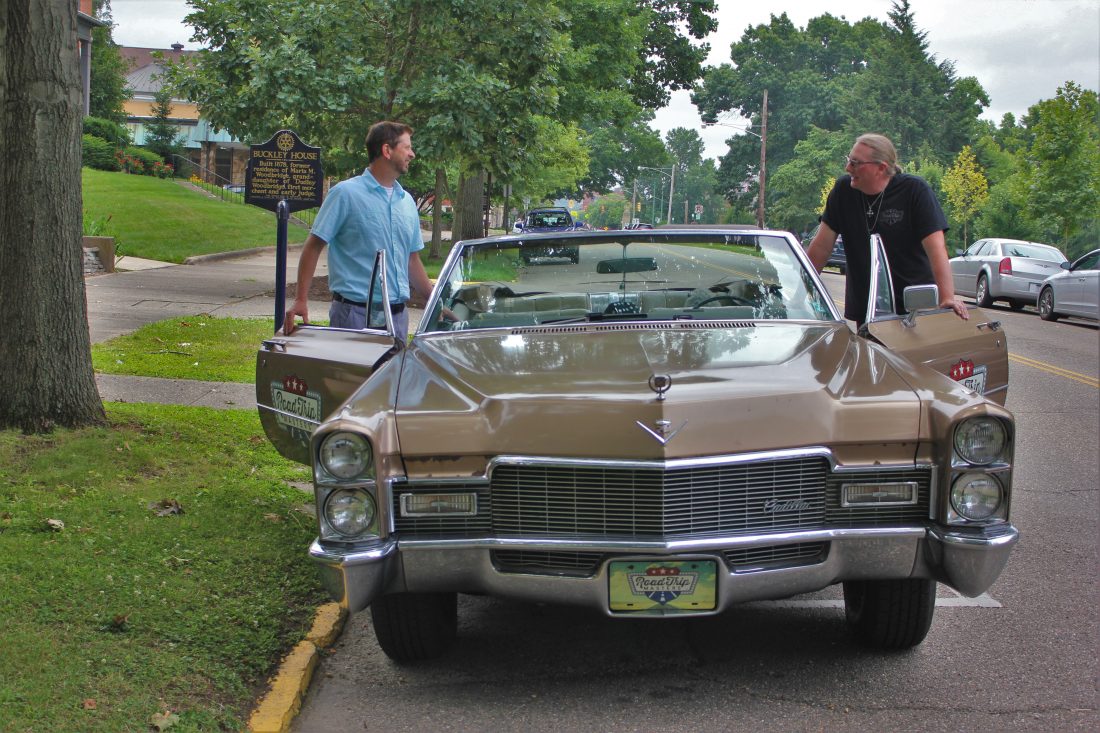 Photo by Janelle Patterson Brian Fulmer, left, and Nick Kessler climb in the iconic 1968 Cadillac DeVille outside of the Buckley House Monday during the filming of their show, "Road Trip Masters."

Photo by Janelle Patterson Brian Fulmer, left, and Nick Kessler climb in the iconic 1968 Cadillac DeVille outside of the Buckley House Monday during the filming of their show, “Road Trip Masters.”

In a 1968 Cadillac DeVille, two middle school teachers are spending their summer on the road to share small town food, adventures and history with a national audience.

Marietta will part of the next season of Road Trip Masters on the Discovery Channel, after a visit from the crew this week.

“There’s something sweet on that steak, I taste,” noted Nick Kessler, 50, as a video crew surrounded him and Brian Fulmer, 44, at a corner table in the Buckley House Restaurant Monday.

“That’s cinnamon, chef’s secret,” replied Fulmer as the two dug into their first meal to be highlighted in Marietta’s episode.

The pair and their three-man crew, plus Kessler’s wife and son, are in town this week filming for an April release of the next season of their show. 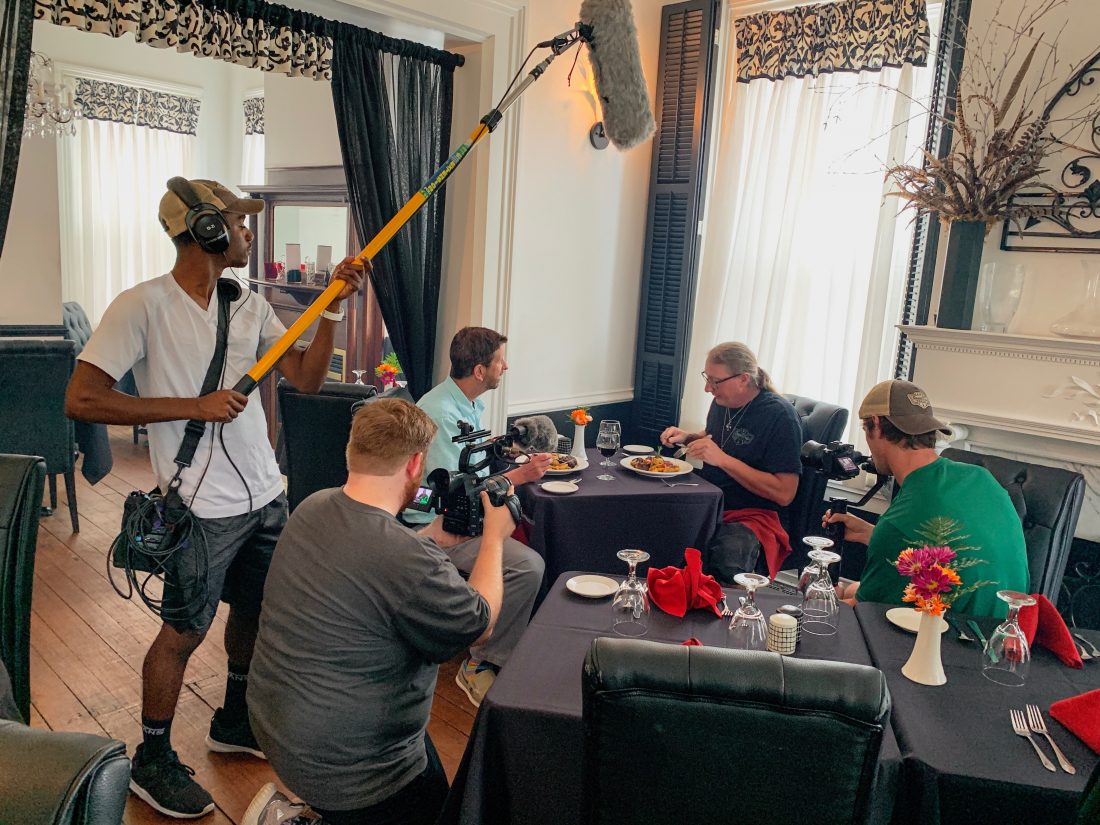 Kessler, a woodshop teacher, and Fulmer, an eighth-grade special education teacher, spend their school year in the same building–Orefield Middle School, in Allentown, Pa.–but then travel with the motto of taking the classroom beyond the walls of a school.

“We’re both from small towns,” said Kessler. “And that history and the culture, those stories of small-town Americana we don’t want to be forgotten.”

And though Marietta was always on the plan for this season–the pair had visited Northern Ohio before–the trip to town was fated as a substitute for Kessler one day also shared her connection last school year.

“She was asking where we were planning to go and I said Marietta, and she goes ‘oh, I graduated from there,'” he described. “Then when I came back the next day, on the sub notes there was a whole list of places to go.”

Their first stop Sunday night was checking in at the Lafayette Hotel and grabbing drinks, but Monday morning they were in the heat of the kitchen at the Buckley House, then out on bicycles with the Marietta Adventure Company before grabbing local brews at the Marietta Brewing Company.

“I made them beef shish kabob with a pomegranate demi-glaze, couscous, tomato curry sauce and vegetables,” said Emad Almasri, executive chef and owner of the Buckley House.

Fulmer followed Almasri around the kitchen at the chef’s pace, quickly moving from ingredient to ingredient and challenging the small camera crew to keep up with the movements amid the heat.

“I loved it, and sharing what I love with them,” said Almasri. “We make nine specials a day, so we don’t get bored.”

Today they’ll be touring Sewah Studios and will spend the afternoon on the Valley Gem out on the waters of the Ohio and Muskingum rivers.

“I think sometimes people can become desensitized to the resources and beauty around them, but middle of the summer and you drive down the main street with no traffic–no stress, that’s a perfect road trip vacation,” said Fulmer.

And sprinkled in between the places to eat and things to do, the teachers also use the platform to share history and the towns’ connections to a national dialogue.

“Growing up I remember loving the classic Saturday morning shows, ‘This Old House,’ watching Bob Ross, shows that broadened your mind,” said Kessler. “I want our (viewers) to want to go somewhere, to be inspired to just get in the car and drive. This is there as a tool. We can only give you the knowledge–it’s up to you what you do with it.”

Fulmer said he looks forward not only to the feedback from his students next school year as they come back with questions and their own research after episodes air of the places visited but also from viewers.

“I would love to get feedback, hear from you showing us where you went, what you learned and saw,” he explained.

“Yes, isn’t that the true calling of teachers? To have your students surpass you?” added Kessler.

And even while on summer break, the teachers are still invested in giving young minds a chance, taking on three recent Philadelphia graduates from the University of the Arts to run cameras and sound.

“It’s a small team, all three of our guys are young enough to be our kids, but they’re talented and professional and what an experience to film with such a small team for a national program,” said Kessler.

The next season will begin airing in April on the Discovery Channel on Saturday mornings, episodes will then be archived online.

• Co-hosts Nick Kessler and Brian Fulmer are filming in Marietta this week for their 2020 season of Road Trip Masters on the Discovery Channel.

• While in Marietta the pair will film highlights in local restaurants and tourist attractions and find out the history of the area.