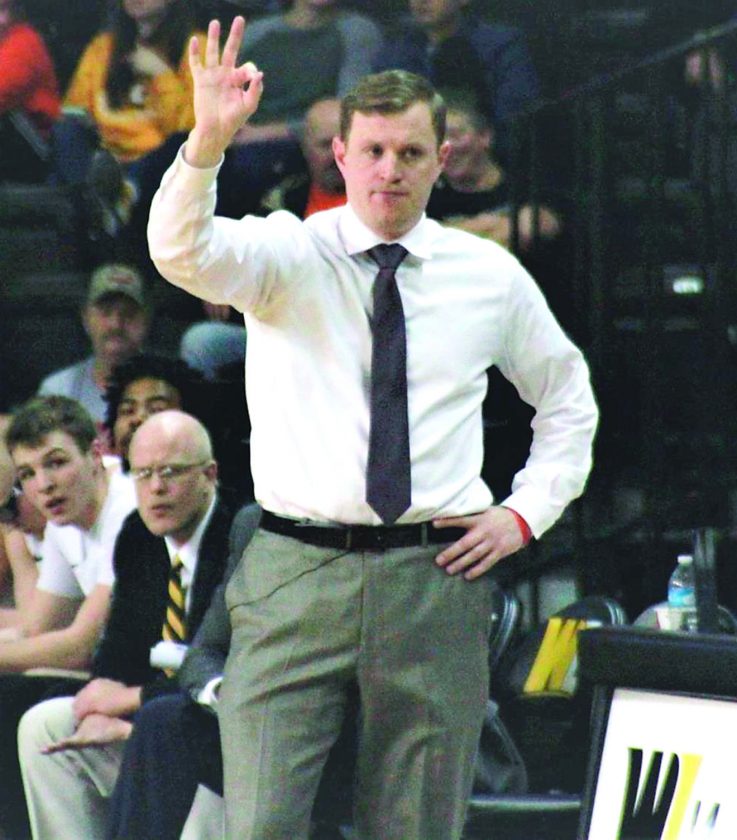 In men’s basketball, no MEC team had ever won both the conference regular season championship and the tournament championship. That changed this season when head coach Ben Howlett’s West Liberty Hilltoppers claimed the regular season title with a 19-3 record and then defeated Concord, West Virginia State and Charleston to nab the tournament crown.

“First off, it was a great accomplishment,” said Howlett, a 2005 graduate of Marietta High School. “We kind of went into the MEC tournament with the mindset that it was a three-game mission. Our league is really good. Division II basketball is really good and there’s a lot of really good players. It’s hard to win games. It’s kind of amazing, because we’ve been the number one seed and we’ve had some really good teams, but we weren’t able to win the tournament. So, it’s kind of like a monkey off our backs.”

The Hilltoppers, who are 27-4 overall this season, earned the chance to host the first round of the NCAA D2 Tournament. They were scheduled to take on Virginia State at 5 p.m. Friday, until the NCAA canceled the tourney due to COVID-19 concerns.

“It’s a shame because the guys have put in so much work,” Howlett said. “I understand why they’re doing it, I just feel bad for our guys.”

The Hilltoppers entered the tournament on a 10-game winning streak. They had three players — Dalton Bolon, Will Yoakum and Pat Robinson III — score at least 18 points per game. As a team, they averaged 102.4 points a game this season. The team has no seniors on its roster and is set up well for the future.

West Lib has made the national tourney in each of Howlett’s first three seasons at the helm. He became one of the fastest coaches in NCAA history to reach 50 wins, doing so in just 57 games. His current record as the Hilltoppers’ boss stands at 81-13. He’s picked up right where longtime West Liberty coach Jim Crutchfield left off.

“Luckily for me, things have gone well,” Howlett said. “We’ve won the majority of our games. That’s good, because losing is not fun. The good part about being here is people expect us to win and they expect us to score points. Winning by 10 is not good enough. We’re expected to win by 20, and that’s good. As a competitor, I’d much rather have that pressure than not have any pressure at all.”

As a star guard for the Marietta Tigers from 2001 to 2005, Howlett never really envisioned himself being a coach one day.

“I never really thought about it,” he admitted. “I just really wanted to play. Once your college career is over, it just kind of hits you, like ‘What am I going to do now?’ I’ve always been around basketball my entire life.”

Howlett continued his playing career with the Hilltoppers and graduated in 2009. He stayed on campus until becoming an assistant for a year at Ohio Valley University. In 2011, he went back to WLU to assist Crutchfield. After six years, he took over as the head man.

“You don’t really realize what goes in to being a coach,” Howlett said. “I was fortunate to be an assistant for six years. Most of the stuff you do as an assistant, you can’t even see on the court because it’s so behind the scenes. As a head coach, everything you do influences the team, from the time you practice to where you eat on the road. I’m not only thinking about myself, I’m thinking about the 12 guys we have on our roster.”

During his playing days with the Tigers, Howlett learned a lot from how his high school coach Ron Warner operated.

“I really admired how Ron Warner did things, how organized he was and how much passion he had,” Howlett said. “He’s a big reason I coach and he’s a big role model for me. I don’t really have any guys I go to for advice. I mostly try to figure things out on my own, but if there was one person that’s helped me the most, it would be coach Warner.”

Warner and Howlett have remained close over the years. Warner helps Howlett with summer camps on an annual basis and follows all of WLU’s games, whether by attending or following the school’s live stream online.

“A lot of people in the area don’t realize how good West Liberty’s basketball program has been over the past 15 years,” Warner said. “They have a better winning percentage than anyone in the country at all levels. For Ben to follow such a successful coach and maintain that level, it just shows you his drive and energy to work to be very successful.”

Howlett recalled his first high school practice as a freshman, when he realized quickly what playing for Warner was going to be like.

“I went to St. Mary’s for elementary school,” Howlett said. “My first practice, I made a stupid pass or something, and he said ‘This isn’t St. Mary’s anymore.’ He was a tough coach, hard nosed, blue collar. He expected a lot out of us. I may not have liked it then, but I’m glad he was hard on me because I kind of take that same approach now with my players. If you want to be good, you have to put the time in.”

Likewise, Warner has fond memories of Howlett as a high-schooler.

“I remember back in high school, Ben was shooting 500 shots per day in the summertime to help become the best player he could be,” Warner recalled. “He went ahead and became the boys’ leading scorer at Marietta High School. His passion for basketball has been there as long as I’ve known him. He’s taken that passion into the coaching field. He followed an ultra successful coach and was willing to accept that challenge and continue at that level.”

Though he makes his living at West Liberty, Marietta still holds a special place in Howlett’s heart.

“I still get emails from people in Marietta and back home,” he said. “It’s very comforting knowing people still watch and follow West Liberty. That support means a lot, because that’s home for me.”

Warner is proud to see Howlett, not only one of his former players but a young man from Marietta, go on to have so much success.

“Ben has continued to represent Marietta in such a quality way, not only with the coaching, but also how he’s helped his players develop as men,” Warner said.

On what advice he would give to an aspiring coach, Howlett said “They can do it. Whatever they want to do, it’s attainable. You’ve got to put the time in. Talk is cheap. Anyone can say they want to do it, but if you really want to do something, you’ll do it.”

Jordan Holland can be reach at jholland@mariettatimes.com.